Out With the Old, In With the Fake 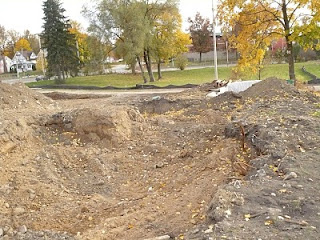 There is a trend here in Ohio, where a frenzy of mall building has destroyed the down towns of small cities. They are building fake small towns, Disney-esque in appearance, after tearing down the existing old buildings and replacing them with psuedo-Victorian/Federal brick-fronted "shoppes." These picturesque villages contain no hardware stores, no little pharmacies, no dry cleaners or other mainstays of small towns. Rather, they are full of upscale clothing stores, chain stores, over priced ice cream shops, and various restaurants. And more upscale clothing stores. There are paving stones in the narrow streets and cast iron street lamps (Or maybe they're made of plastic designers to look like cast iron.) There is some on street (or maybe I should call it on-lane parking) but mostly the places are surrounded by huge parking lots, so that one can approach the "village" from a distance, across the non-verdant fields of asphalt. We're not in Hardy country, in spite of the vaguely British names of these places.

My small town, which used to have an actual downtown in which one could find just about anything one needed, has long since died from defection to the many malls surrounding us. We still have some nice old buildings, in which some enterprising folks have started small retail businesses: a book store, a gift shop featuring well-crafted items, a chocolate shop...and bars, and bars and three or four tattoo parlors.
In the last year or so, a gazillionaire has managed to put up a string of fake Federal style building fronts over a group of nondescipt buildings and brought in some boutique-y businesses which are now the pride of the Chamber of Commerce. The effort is to get the students from the university to come into the downtown and shop. He is apparently unaware that students already come downtown in droves to drink and get tattoos. Many of the service businesses which students used to need in town- banks, post office, restaurants - are available on campus, along with stationery, CDs, and periodicals.
Now, with stimulus money as a boost, the town and university fathers are in the process of realizing their dream of having a conference center and hotel right downtown, along with a multi-modal facility for buses, bicycles and car parking. A conference center! A hotel! Now hundreds of people will come to Kent for conferences and stay in a state of the art hotel! There also will be an enormous visitor center right on the by-pass, right in the city, for the university! An esplanade wends its way through the campus right into the downtown, to ease the way for students seeking to get a tattoo! Dozens of houses will be torn down for this symbolic yellow brick road to the many bars.
Right now the hotel/conference center site, one whole square block, is a desolate area of earth scraped over what used to be buildings and houses. I waited too long to get a picture of what it looked like for several weeks, when all you could see were the remains of foundations and basements of what used to be there. It's all surrounded by chain link fences. Building will start soon. There will be retail located in the hotel and the multi modal building - tattoo parlors, bars, maybe a pool hall or game arcade.
And when it's done, we'll have jolly crowds showing up to cheer for our half -baked football team, our pretty good basketball team and who knows what else. The theme is red brick and a mish mash of architectural styles. The buildings will be good for about thirty years at the most and some ambitious developer will tear them down find a new use for the land - maybe a mega tattoo parlor with attached bar.
On the other end of town, the landscape has been made barren in order to build an enormous bridge supposedly to ease traffic over the river. Unfortunately, the design will complicate matters severely, especially since the no-planning committee approved the construction of a mega service station right on the corner by the traffic light, where two main roads come together, both of which are nightmarishly busy during rush hour. It's one of the few ways to get out of town on the north side and there are thousands of commuters who use that intersection every day going both ways. Oy weh!
I don't expect things never to change, it's just that the people in charge around here have no vision, even though they think they have. They still be live in bricks and mortar retail as the salvation of their town, rather than look at the future and how people's needs will change. So they tear things down.
Posted by Guenveur in Kent at 3:16 PM 1 comment: 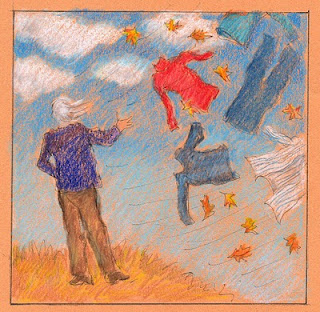 It's the time of year to get out the fall and winter clothes and put away the summer stuff. Twice a year I go through the same chore, and the Amvets, collectors of other people's cast-offs, fill their trucks with things that people don't want anymore, including clothes that I am just plain tired of. At my age, I don't usually wear things out. I just get really, really bored with my clothes. (Why do people say bored "of" these days? That's what my kids said when they were little, but now I hear adults using that phrase.) This year I got particularly bored with some things I've had for about 6 or 7 years. I just don't want to wear them any more, ever. They're not worn out, but my interest in them is.

Now this is the sort of thing about which I feel guilty, on the order of that thing that mothers used to day about starving children in China. It just seems so dog in the manger.Well, what happened this year is that I kept getting theses Land's End catalogues which had some things I have been trying to find forever, namely, long-sleeved cotton tee shirts which are long enough for my torso, with a crew neck, and all in the most terrific colors. For the last ten years they have made the kind that would hit my around the belly button, with V-necks, boat necks, or scoop necks. I found more at Kohl's and, and old fashioned cardigans, without ruffles or any fancy buttons. Bean's and Land's End don't even have that kind. So I had to buy a lot of new things that I won't be bored with for some time to come. And the beauty part is that all of these things were ON SALE!
Around the house, I usually wear favorites things, like a couple a really nice long sleeved undershirt-y weave things that I bought at Kmart years ago and old blue jeans.
As you can see, I am not a high end shopper. I do clean up good, in the event that I have to attend something where a Kmart undershirt-y thing would not be appropriate, such as wedding or funerals.
The Cleveland Orchestra concerts start this Friday and I'll wear some of my new duds. Nobody gets too fancied up for these matinee concerts, since most of us are geezers who need sensible clothes that don't bore us.
Posted by Guenveur in Kent at 4:04 PM 2 comments: 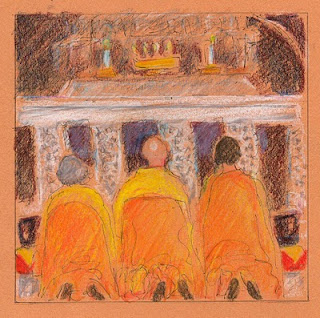 Last Sunday was the day of the memorial service mentioned in my last blog. It was quite moving and a memorable memorial. First of all the church, St. Colman's in the near west side of Cleveland, is a most impressive space. Built in the early 20th century for Irish and German immigrants, it has the grandeur of a European cathedral. It was one of the many diocesan churches which was to be closed by order of the bishop. However, the pastor and the parishioners refused and fought with and won over the bishop. It is proudly the Irish church of Cleveland. I can't imagine how it could possibly have been closed. So now it still stands and serves a mixed congregation, since that area is now largely Latino.

The service started with a group "Om," a sort of audible breathing in and out which filled the space with a living hum. Lovely! Then there was a slide show of the life of the deceased (hereinafter designated as F.) presented by his brother, great family pictures of the two of them as children with their parents and as young adults. There were testimonials by F.'s friends, stories of a talented and witty person. In fact, one of the reasons the service was held at the church is that F. had written a story for the local newspaper about the church and its congregation and the need to preserve it. He had been a writer, a historian and a volunteer for many local historical sites, including the famous Playhouse Square, which is one of the highlights of downtown Cleveland.
One of his friends and Emily and John sang "If I Had a Hammer," a song he had like and everyone sang along. Sounded so fine in that great place.
The Buddhist part included some candle lighting. The Buddhists present were all white suburbanites wearing saffron robes. There was a lot of chanting in which we were invited to participate. Even though it was all written in the program, I had a hard time following it, and jut sort of did some Sha Nah Nah noises, which fit in with the general hubbub. It sounded good since there was a built-in reverberation there.
The final music piece was a kind of Jewish mourning song, sung by the folk singer along with a violinist, again the congregation joining in on the chorus. Even though I did not know F. well, I think he would have liked his send-off. In fact, it was a literal send-off in a way. The final ritual was the clapping of our hands three times while the Buddhist leader told F. that he could go now.
I like that idea . In fact, I thin it would be a good way to get rid of guests who stay too long. Clap! Clap! Clap! Off you go!
Posted by Guenveur in Kent at 2:35 PM No comments: 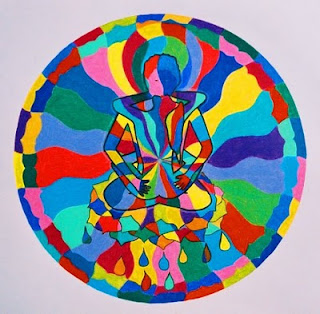 Emily is home for the third time in six months. In a previous blog I wrote about the tragic loss of our friend's brother. The friend came to our family through Emily, and he is one of her closest friends, so she came back to the U.S. of A. to be with him as he goes through this time of mourning. He has planned a memorial for his brother this coming week-end which promises to be a very interesting, as well as sad, event.

The deceased was a non-observant half-Jewish Buddhist. He had been very active in the Buddhist community in the Cleavland area, and there has already been a Buddhist memorial, so this one will be more ecumenical. There will be chanting, tabla drumming, incense burning, and various testimonials, one of which will be by a rabbi who is also a member of the Buddhist Kirtan in Cleveland. John and Emily will be singing a folk song with a friend of the deceased. There will be audience participation in the chanting and some rhythmic clapping.
All of this will be held in a beautiful Catholic church in an ethnic neighborhood on the near west side of Cleveland.
So I guess all the bases will be covered and the soul of the departed will be at peace at last. And our friend will be surrounded by people who care about him.
Posted by Guenveur in Kent at 5:48 PM No comments: