Would a Groundhog Lie? 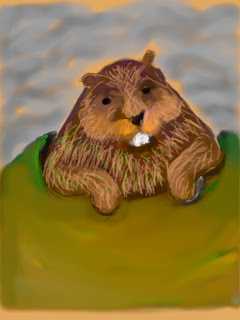 The other day there were articles in both of the local papers, headlined “Disappointed in Punxsutawney Phil’s Predictions,” and claiming that people were actually angry that spring hadn’t started when he had “sad” it would. Now everyone knows that the whole groundhog thing is just a whimsical custom, an interlude of fun in the gloomiest month of the year for those of us in the sections of the country where the North wind doth bow, and blow and blow. I just find it ludicrous that newspapers would fill space with such a nutty non-news item. I’ m also willing to bet that there are those who think the whole thing is real, the kind of folks who think that “cave” men rode around on dinosaurs.


John actually went to Gobbler’s Knob where Phil hangs out to watch the annual event. His friend Dave is a freelance photographer and had been assigned to cover it this year by the New York Times. As he described the ceremony, conducted by officials in top hats, holding fancy scrolls from which they read historical accounts of Phil’s life, I couldn’t help but think of my favorite Christopher Guest film –“Waiting for Guffman,” in which a small town puts on a historical pageant. The citizens have the routine down, bringing in over ten thousand eager spectators with money to spend. John enjoyed it immensely. We don’t know how Dave’s photos turned out, but those of you who get the Times may have seen the results of his work back in February.


Since spring always begins 6 weeks after Feb. 2, no ,matter whether Phil sees his shadow, the whole thing is pretty ridiculous, unless you live in Punxsutawney’s Gobbler’s Knob and own a top hat you can only wear once a year.
Posted by Guenveur in Kent at 8:41 PM 1 comment: 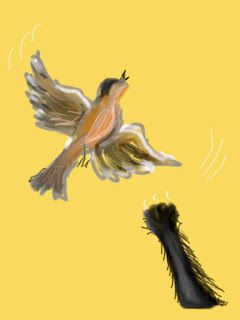 Bird lovers may want to avoid this post. It’s that Law of the Jungle, Nature’s Way, the Nature of the Beast and all. I have written of Sixto, the extraordinary cat and his ability to catch and retrieve objects tossed his way. He can jump easily three feet into the air form the ground. He catches wadded up newspaper in his front paws, leaping up like Michael Jordan. When he gets bored with the action, he wanders away as if he had never been at all interested in this sort of thing, leaving his humans exhausted and amused.


Some time last week it was obvious that a bird had somehow become lodged in the air vent above the fan over the stove you could hear a faint chirping now and then, but there was not much one could do about it. I was in the living room reading when I heard this terrible crashing banging noise, and Sixto cam running from the kitchen, and then back into the kitchen, leaping about in there. Then he rushed back into the living room again with something in his mouth. When I bent down to see what it was, it got away from him and fluttered back into the kitchen. It was a small sparrow. It kept flying to the closed windows, where Sixto could easily trap it. As it flew around Sixto made these tremendous leaps, almost 5 feet off the floor, trying to capture it. Which he did finally, against a window. I picked him up and shoved him out the door. I did not care to watch aviacide. I felt so sorry for the bird. I had tried to catch it when it landed on a window ledge, hopping around and chirping (the bird, not me), but it was too fast for me, and ended up in the feline jaws of death.


I scolded Sixto when I let him in and he knew I was not happy with him, rubbing around my ankles and doing his adorable rolling around thing.. Or he could have been celebrating his first kill. Who knows the mind of a cat, if they indeed have one? It was very sad to me, but it’s what they do. I remember reading “Watership Down” years ago and looking at the resident cat of the day and wondering how something so furry and sweet could be so vicious. It’s the downside of owning the beasts, much as \we love them. Now that coyotes have invaded the cities, cats have become prey, too, but I hope that never happens to any that I know or love.
Posted by Guenveur in Kent at 4:48 PM No comments: