The Winter and I 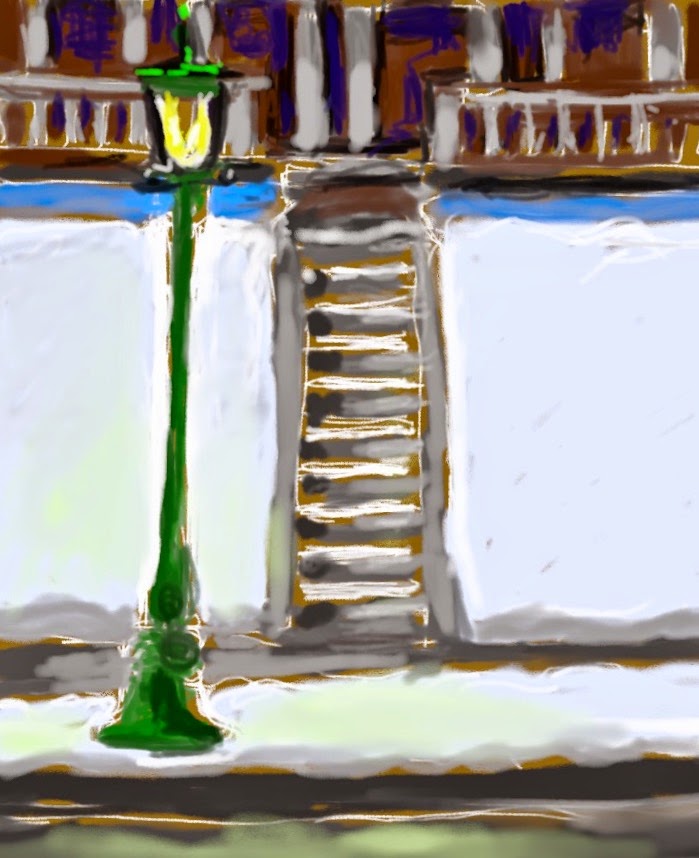 Although I was born in New Jersey, we moved tomAtlanta when I was 4 years old, and that became the definitive homeplace of my childhood. I didn't think of myself as a Southerner; even though my father was from Alabama, I identified with the Yankee side of my mother. But the South was where I lived during the most formative years, shaped also by the Great Depression, which had an effect on all those of my generation.
Southern winters were mild then, sweater weather mostly. I would see pictures of snow, ice skaters, kids on sleds, kids building snow men and having snowball fights. It seemed to be related to fairy tales, not quite real. Then, one late winter we had a snowstorm, right there in Atlannta. Our front yard was covered in soft, white snow, like in the picture books....all 2 or 3 inches of  it. Of course we were not prepared for it: no heavy jackets, no boots, no hats or mittens. I think we probably went out init anyway, because school was canceled for a couple of days, and I think if we'd stayed inside our mother would have run away from home.
Another year we had an ice storm, a very scary sort of thing,Mitch warnings of live wires on the streets that would instantly fry you to death. No school, of course. The power was out, too. Before the storm, I had just started reading "Tom Sawyer," and continued to read it by candlelight. Our mother stayed put, even though we were all in the house all day, not allowed outside, last we step on one of those deadly live wires. Those two freakish winter storms were the extent of my experience with winter must be like Up North.
When I was in the middle of seventh grade, my father took a job in Ohio. He left before Christmas, leaving our mother  to do the packing up and buying a new used car and driving it from Atlanta to Springfield, Ohio, with five children, none of whom wanted to leave Atlanta. My older brother had just turned 16, and had just gotten his drver's license. He and Mother picked out a 1934 Dodge sedan, and 5 days after Christmas 1939' we set out for the unknown. We'd never even met anyone from Ohio. This was long before the days of freeways; most  highways were two lane roads.
Everything was fine until we crossed the Ohio River and ran into snow. Neither my mother nor my brother had ever driven in the stuff. I just remember being sure we'd all be killed. In the dark of night, we slid off the road into a snowbank, but didn't die. A kind man pulled us out, and we spent the rest of the night in one of those precursors of the motel, a "tourist cabin," one of a series of little one room wooden shack s with a pot-bellied stove that glowed red but didn't give off enough heat to warm our Southern bones. We safely arrived in Springfield the next day, New Year's Eve.
Arriving in Ohio in the winter gave us plenty of opportunities to experience snow, and plenty of it. We acquired the needed clothing, including ugly galoshes, which closed with snaps and didn't keep our feet warm at all.
The snow was disappointing. In those days, heating with coal furnaces was common, so the lovely looking white stuff had a grimy gray coating the next day. It also developed a crust that would wound your ankles as you sank into it. We lived in half of a double house with a gas street lamp in front of it
that cast a dim and depressing yellow light over the gray snow.
That was my introduction to the reality of snow, and even though it's been over 75 years, and it doesn't get gray from coal dust,  I have never really liked it much, except on nights when the moon is full, shining  on it, and I'm inside, warm, looking out. 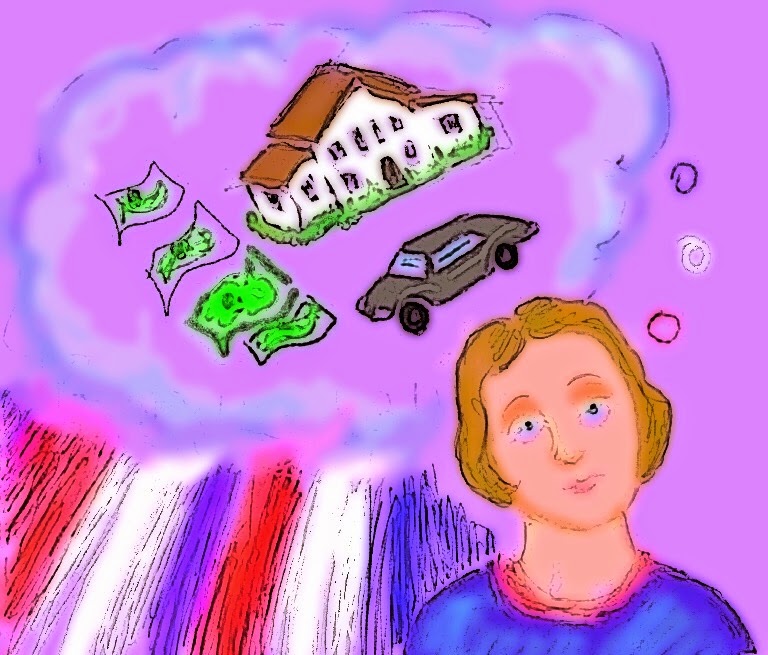 I have wondered what exactly the "American Dream" is. It seemed to be a popular expression during the Reagan administration. The first time I heard it was from Arnold Schwazaneger, who claimed he had achieved the Amewican dweam, so I thought maybe it meant a person could go from being a body building immigrant to marrying a president's niece, making movies, getting elected to office and becoming very rich. I heard it attached to home ownership as the ultimate achievement of the Dream during the Cheney years.
I decided to Google it. It was coined in 1931 by a historian and writer named James Truslow Adams. He said that the Dream is that "life should be richer and fuller through achievement to the best of one's ability regardless of  social class."
This has been adapted over the years to fit the politicians' approach to particular voters. Those who work hard to achieve success have fulfilled the requirement entitling them to attain the Dream. Working "hard" is a relative term, as is "success."At any rate it sounds reasonable and fair that anyone can achieve in this country regatdless of "social class," which we are not supposed to have in America. Really? Some claim that the American Dream has its roots in the Declaration of Indepence, the part about "life, liberty and the pursuit of happiness."  (There are those who swear this statement  is in the Constitutio, and that it's a law!)
So far as I can see, the current interpretation of the American Dream seems to pertain to material accumulation and status. There's nothing about the ideals of freedom and equality in most current interpretations of this American Dream. The originator of the phrase made a fairly simple  statement which has come to mean something other than the hope that one could make a good life here. He wrote this in 1931 at the onset of the Depression, perhaps in the spirit of American optimism.
And Arnold's Dream turned into a bit of a nightmare for the president's niece.
Posted by Guenveur in Kent at 4:29 PM No comments: 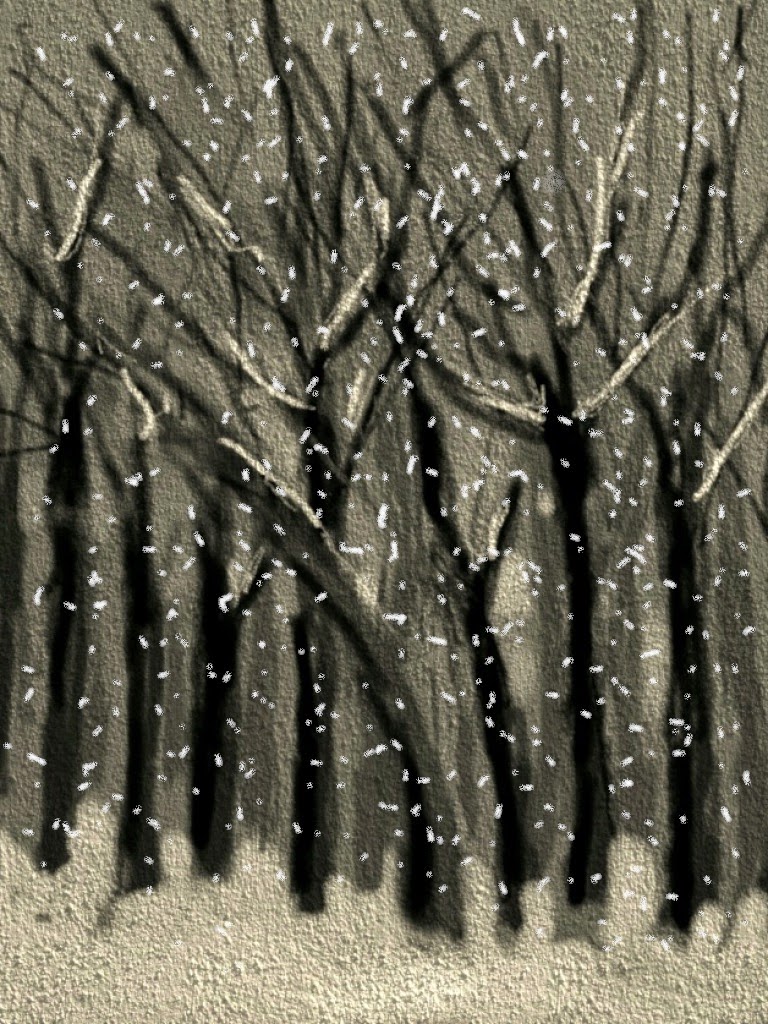 Like most of the Northeast, we are experiencing a lot of snow, a lot of ice, and very, very low temperatures. (As I wrote that last word, I recalled how my father used to pronounce that word in his Alabama accent: tem-per-at- tires,  each syllable distinct.) Many   mornings, our outdoor thermometer pointer is below the zero mark, rising into the high teens by afternoon, then going back down. We have had a lot of sun, though, which makes everything outside white and blue and cheerful. A person needs sunglasses. Right now it's snowing, just what is called a snow shower.  Enough of the weather report, since it's not news in the winter.
I am spending most of my time binge watching past TV series on this IPad, thanks to Netflix streaming video. It's addictive, even though the one I'm working at right now is the much acclaimed Friday Night Lights, acclaimed by lovers of plunging necklines, shrill Texas women and hapless teenagers ( played by 25  year old actors) and their equally hapless parents. Oh, and there's football, lots of football. .There's a serious continuity problem - people appear and disappear with no explanation, plot lines get confused about what happened in the last season. Perhaps this is because the networs changed the day and time so often, and then it went to a different network altogether.
Why am I continuing to watch it? Because it's always, mostly, sunny in Texas. That's why all the girls and women wear cleavage down to here clothing. Maybe that's what the critics liked about it. Another interesting, if curious, thing is that no one has a doorbell in this town. They have cell phones, computers and such, but every time someone goes to a home, they knock on the door....Rap!  Rap! Rap! Knuckles of steel they have. Strange. Maybe in the final episode the reason for this phenomenon will be revealed. So I'll stick it out to the bitter end.

Posted by Guenveur in Kent at 7:58 PM No comments: 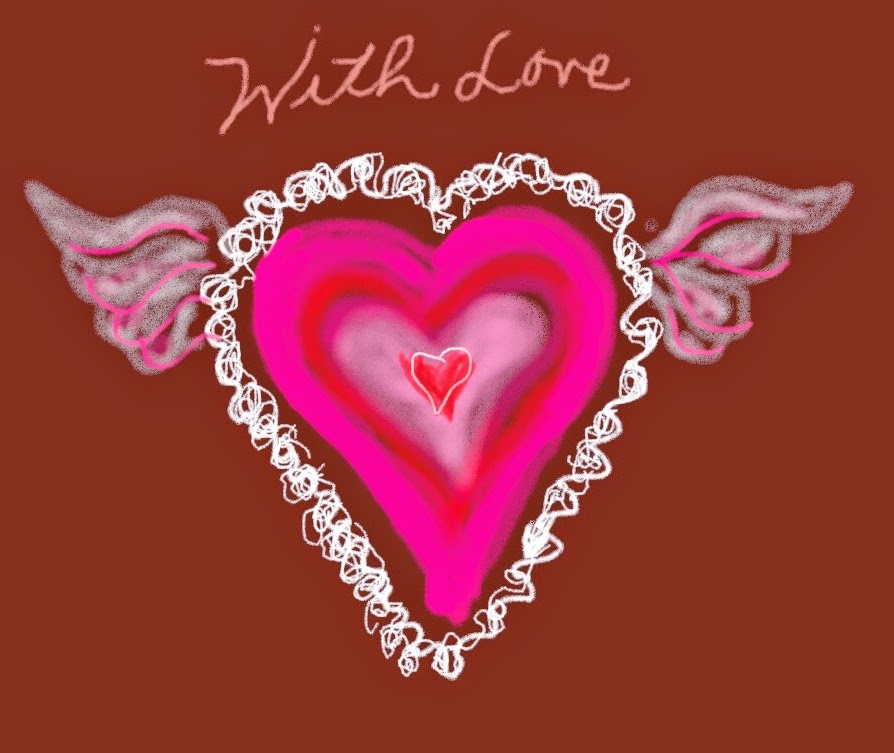 when my granddaughters were little, I used to make them Valentines and birthday cards. I had a book on pop-up cards, and had great fun devising cards with moving parts and little surprises that they enjoyed ( I heard), and I felt like a fairly good grandmother. I have gotten out of the habit of doing those cards and send them Jacquie Lawson cyber cards, which are beautiful, but not particularly personal.
I have gotten a bit lazy about drawing and painting in general, at least with real materials.
I have a couple of drawing apps on this IPad, which I have been using to illustrate this blog. My favorite is IPastels, because it is easy to use without much of a learning curve. I have a couple of others which are more complicated, and probably more versatile. IPastels has a great pallete, a wonderful range of colors, and works much like real life pastels. It lacks an efficient zoom function, the thing you need for fine detail, but I'm gradually learning to use what it has without smearing everything. It also doesn't have any choice of support surface, which another app I use does.
Another interesting feature of cyber art is that there are a number of filters one can use on a finished piece, which can create interesting variations in the work. I have used these filters on a number  of illustrations on this blog. The picture below shows how a filter has affected the picture above.
To get myself back to real work, I am contemplating an online are course given by a wonderful artist I know, hoping to jump start myself into getting back into the studio and de-sluggify myself,
artistically. 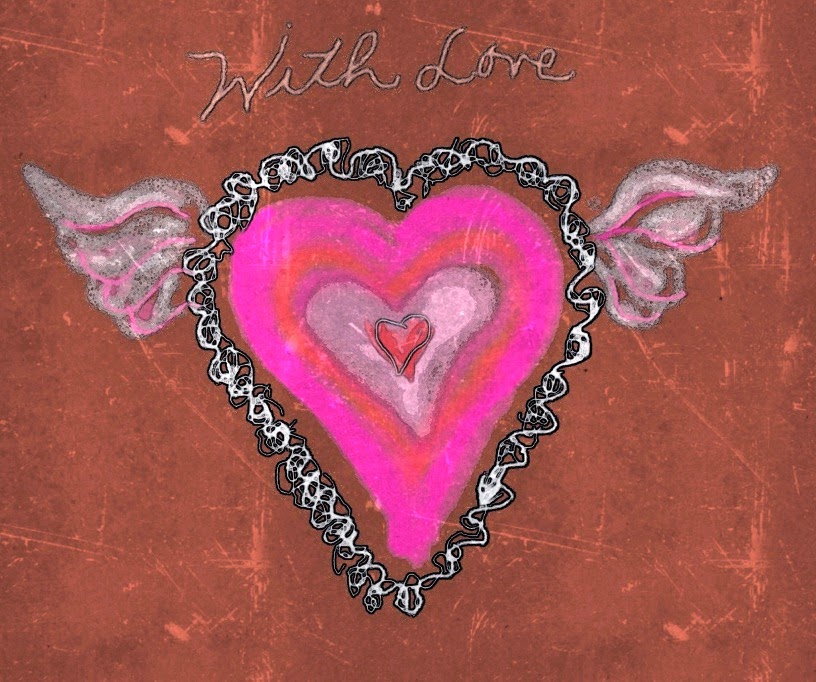 Posted by Guenveur in Kent at 9:10 PM No comments: