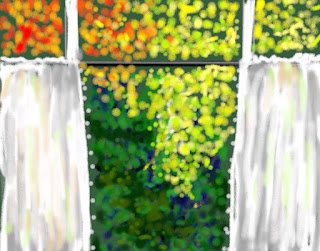 This is what I see from my living room window. The Fall colors are brilliant this year, in spite of a rather drought-y September. The trees are keeping the leaves on, even though we've had a few heavy rains in early October.  I think this will be the last week for color, though.
Last week I introduced a friend to the golden tunnel on Lake Rockwell Road. I love showing that to people. Since I was a rambler when I drove, I had a number of very fine places to admire in the different seasons. Northeast Ohio has the kinds of seasons which make for variety, which mark the passage of time. There are unpleasant periods- February, July -  which make one pathetically grateful for those lovely days in May and October.
My friend Frances is moving to the San Francisco area, and I notice that she has been posting colorful
photos of autumn trees on her FB page, perhaps to remember us Easterners when she leaves here in a few weeks. We'll think of her this winter, and send her photos of gray skies and snow to keep her from being too homesick. 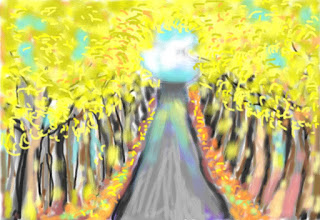 Posted by Guenveur in Kent at 7:19 PM No comments: 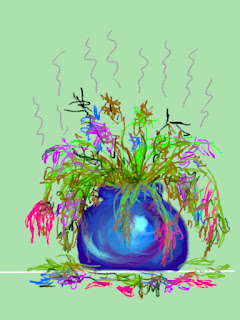 Years ago there was a sappy song, "You Don't Send Me Flowers," very popular with moony-eyed wannabe lovers. Barbra and Neil moaned in harmony, while listeners shed a tear or two over the negligent suitor, who found, no doubt,that liquor was quicker than flowers, to paraphrase Ogden Nash. (The first line of his poem was, "Candy is dandy." He didn't mention flowers.)
I like flowers and flower gardens, the scents and colors are lovely to see and smell. I used to grow a nice little garden, and looked forward to enjoying whatever showed up in warm weather. I have friends who are terrific growers of all sorts of beautiful blooms. They are kind enough to share these with me.
Unfortunately, once these pretty things are put into a vase and set out to be seen, I have a tendency to forget about them, even if they are in front of me on the table where I eat. After a few days of neglect,  or, actually, many days of my ignoring their existence, it suddenly occurs to me that they are quite dead, deceased, no longer vibrant, no longer pleasantly aromatic, and have morphed into garbage. They do notdeserve such a humiliating demise.
Of course I feel bad about this. They were meant to enhance my environment and give me pleasure, and I have turned them into the setting for Miss Miss Havesham's moldering wedding table.
On the rare occasions when I have received an ornate arrangement from a florist shop, the same thing happens. It is one thing to neglect posies shoved into a random vase, but quite unseemly to do the same to a bouquet  accompanied by ribbons and a fancy container. The same dead floral fate ensues.
I am simply unworthy.
Please don't send me flowers.
Posted by Guenveur in Kent at 5:15 PM No comments:

Notes on a Pleasant Weekend 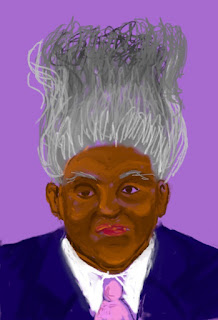 On Saturday, the Stevenses from near Philadelphia were in Kent for a visit with old friends. Nancy and Joe treated me to dinner at the Pufferbelly, which before its conversion into a restaurant thirty years ago had been the old Erie depot. It was great to see them and spend time catching up. I realized I had known them half my life. Nancy and I met  through paraprofessional training for the crisis line which was then on the KSU campus. We were about the only non-students in the group. She was much younger than I, but very much a grown- up. I think we were a bit bemused by the younger folks, for whom some of the drug culture was not so foreign. Her husband was finishing his architecture degree and she was working as a secretary for a couple of hippie lawyers. She is very smart and funny, two qualities I enjoy very much in friends.
Unbeknownst to me, who had been asked to make a reservation for the event, the Pufferbelly was celebrating their version of Oktoberfest, with appropriate German cuisine, like bratwurst and wienerschnitzel. The food was good, but there was also a brass band about eight feet from our table, playing such German favorites as the "Beer Barrel Polka" and " New York, New York." Yes.
There was a lot to talk about, since they had recently returned from a very interesting trip to Scandinavia. Somehow we managed and celebrated further by going to the popcorn shop up in Acorn Alley for their homemade ice cream. All in all it was a fine visit with two fine people.
Sunday was a beautiful day, and John drove me up through Geauga County and points north to check out the state of autumn foliage. It's not quite at its best, but  the blue sky and pastoral scenery was quite satisfying. We explored side roads, rambling here and there and finding more color the farther north we went.
Suddenly, we were in an area with Amish buggies and pedestrians out for a Sunday walk along the narrow roads.  Next came a white painted cross-hatch fence, a large white building that had an air of some kind of meeting place. John followed the fence around a corner, where it stretched out ahead beside the road as far as one could see. There were a lot of statues, which turned out to be not stone, but concrete, statues of indeterminate creatures. Then there was a small hills , topped by a flagpole from which an enormous American flag was flapping, topped by an equally enormous crown. Then an open gate, through which you could see mounted cameras, and a large sign: THE KINGS. John got it right away: it was the estate of Don King, the infamous fight promoter, mentor and exploiter of famous boxers, like Mike Tyson. Interestingly, Tyson's now vacant mansion/
compound is not far away, but both are basically in the middle of nowhere.
I doubt that Mr. King was in residence. There are many buildings visible within that white fence, some well kept residences, the grounds studded with concrete  images of whatever Mr. King fancies as art. I wonder what the Amish neighbors make of this display. I wonder what they make of his hair, if they have caught sight of him, perhaps a sort of upside-down beard?
All in all an enjoyable weekend involving a welcome visit with dear friends and an unexpected obscure encounter with fame.

Posted by Guenveur in Kent at 10:02 PM No comments: