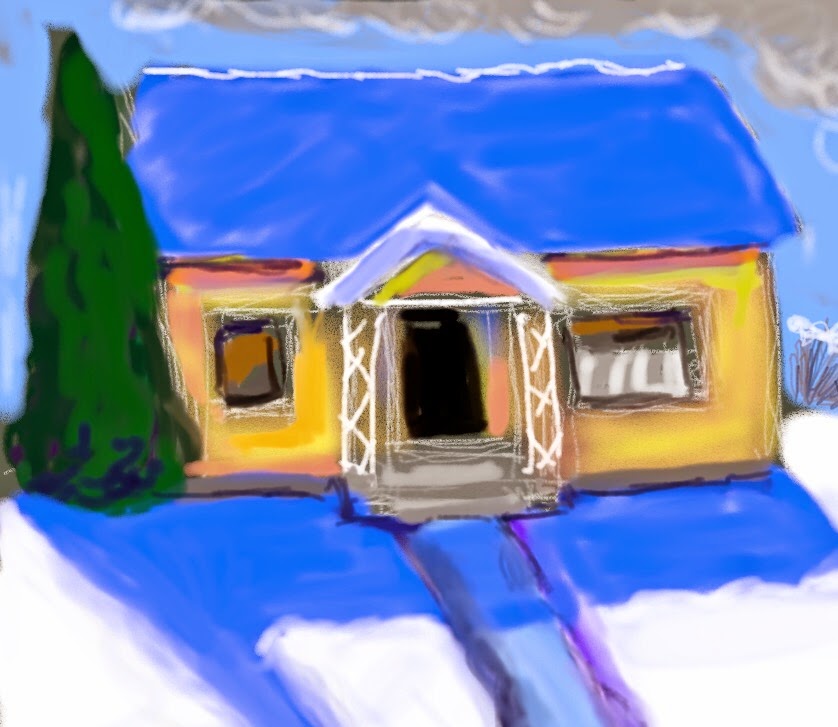 The first month of 2015 has gone by so rapidly and so coldly. Lots of zeroes and near zeroes with plenty of snow to go along with it. I bought some very nice new warm boots before the snow fell, and they are working out quite nicely.

John escaped for a trip to the South, but got back in time for more snow. And just in time to shovel it. While he was gone, good old Earl showed up to clear a path out to the curb so my friends could pick me up to go to our water aerobics class. It seems incongruous to be putting on a bathing suit this time of year, but the pool is warm and the exercise is vigorous and you bundle up coining and going.

Three houses next to me have turned into student housing. In two cases, the houses were bought by parents for their daughters to live in while they're going to the university. The two girls, from two different families, are each sharing their houses with two friends. That makes three people in each house, which is against the housing code, which was developed when I was on the Kent Board of Health. The main problem is that these six students, plus two more students in the third house, all have cars, which they park on the street of this formerly quiet street. This has made it difficult for my friends and family to pick me up. One good thing about the snow is that when there iare over 2 inches deep, on-street parking is verboten, so that the snow plows can do their job. I don't know where they are parking now, but most of the cars have disappeared for the time being. All of the cars make it obvious that there are too many students living in these houses. The former off-campus student holding area has been destroyed in the expansion of the university, including a massive newcarchiture building and the so-called Esplanade, a paved walkway which cuts through campus and leads to the downtown so that students can go there and spend money. Anyway, I have left a note on a car and also asked a couple of the students not to park in front of my house, and they have been good about it so far. But I do  hate to see our quiet street turned into an adjunct of the university.

Posted by Guenveur in Kent at 10:30 PM No comments: 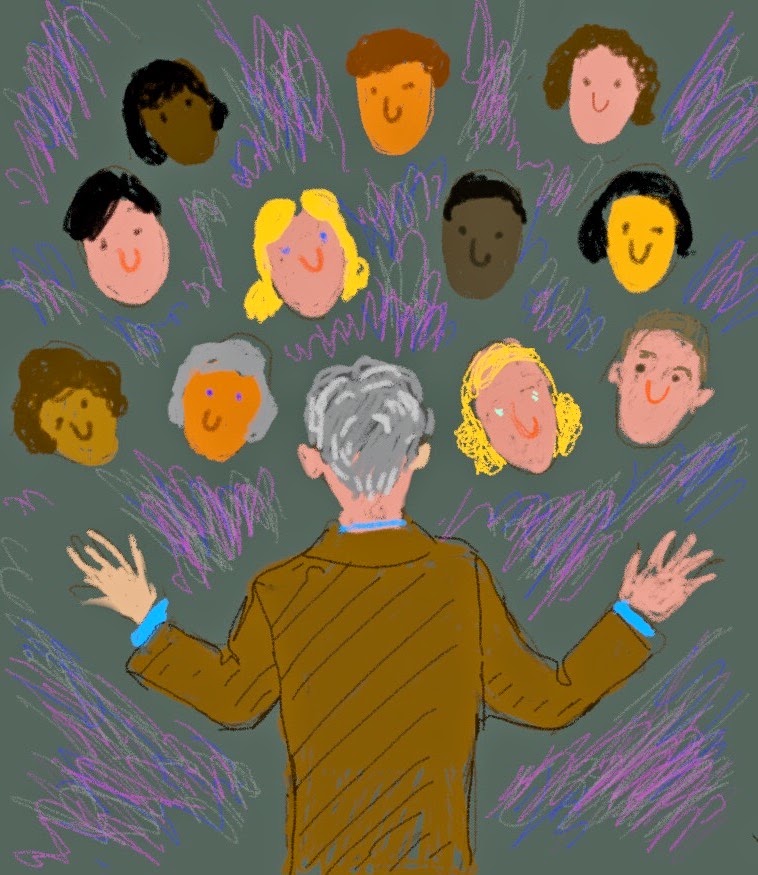 Since I live in a university town, where my husband once taught, many of my friends and acquaintances are or have been professors. Many of them are now retired. They are intelligent, interesting people, highly knowledgeable not only in their special area, but having a breadth of interests.
However, for some after retirement, there is a condition I call Professor's Disease.This  disease comes from having classrooms full of students in thrall to the professor's wisdom for some thirty years or so. The main symptom is "I'll talk, you'll listen,"  resulting in one-way conversations. They are not necessarily boring, but when one is on the receiving end, there is a sense that there may be a pop quiz after half an hour or so of listening, or pretending to listen, to what amounts to a sort of lecture. These folks can go on and on for some time, perhaps for fifty minutes, the usual period for a class. In the case of a seminar, it could be two hours. I've often felt that if I raised my hand, I might make a comment or ask a question, but I'm afraid that might encourage an additional flow of verbiage.
In good weather they can be seen downtown, like a pointer at a pheasant hunt, holding one or two people immobilized, except for the faint nods,  at bay while  offering the latest scholarly take on politics, the state of higher education, etc. etc. etc. it must be terrible not to have those classrooms in one's life any longer.
I mentioned this disease to a friend, and she said that on occasions when she is at social events and doesn't feel  like engaging in conversation, these are the people she seeks out, knowing that the ball is in another's court, and she can relax and enjoy her drink and appear to be sociable. And, as I mentioned, they can be interesting.
They are not good at listening, so if their hair is on fire, they may not hear what you are saying. That's why it's important to keep a drink in hand, preferably non-alcoholic.
Posted by Guenveur in Kent at 7:22 PM 1 comment:

The Relativity of History 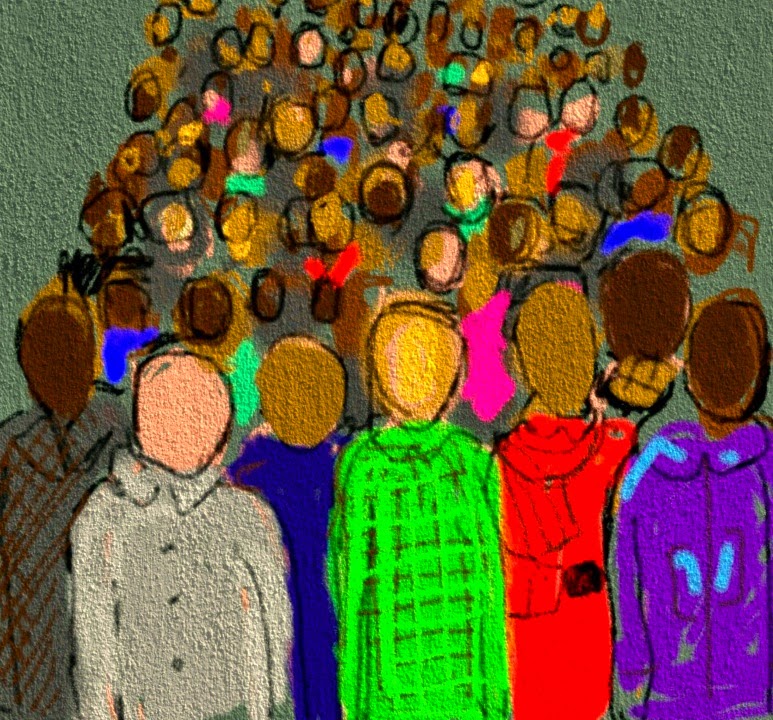 Yesterday, on Martin Luther King, Jr. Day, there was a free showing of the film "Selma," for high school students in Akron. In this morning's paper, several students were interviewed to get their reactions to the film. Their response was that it was good to "learn history," I had two reactions to their responses: why didn't they already know about this, and their calling it "history."
There  have been, even recently, some excellent documentaries on the civil rights movements of the sixties, to say nothing of that superb "Eyes on the Prize" series. Are they not using these things in schools these days? They don't even have to read text books to learn about one of the major issues of the 20th   century.
Then I realized that this "history" was 50 years ago, and that the parents of these kids probably weren't even born when all this was going on, and had no idea of the events, the struggles, the dangers and the bravery of young Black students and their parents in the South at the time. When I was the age of the kids who saw "Selma," fifty years ago to me would have been the late 19th century -ancient times to a 15 year old.
Fifty years ago to me, however, does not seem that long ago at all. I vividly remember seeing on television Black people rallying for voting rights being knocked off their feet by fire hoses, being attacked by police dogs, being beaten by nightsticks by the local police. I was shocked that President Kennedy stayed silent, absolutely ignoring what was happening to American citizens. I sat down and wrote a scathing letter to him, but never mailed it, feeling helpless. This is the president whose picture graced many Black homes. In those days the Southern Democrats wielded most of the power in the Senate, and they weren't about to do anything either. I can't remember how long it took Kennedy to react, but his lack of outrage at the violence in Selma was a  lasting disappointment to me.
I think in the end it was the Selma March, and the participation if so many people from all over the
country, that turned the tide, but not until there was more violence and several deaths, and the hateful
Bull Connor, the "law man," who beat and bullied anyone who crossed his path.
Yesterday, there was an article in the Akron Beacon Journal about the Selma Sympathy March, fifty years ago. My friends, Shirley and Marty Baron and I were in that march, part of the crowd of 2500' white and Black citizens who felt the need to do something. I'll never forget how quiet the march was. This was before the murder of Viola Liuzzo, the woman in the Selma March in Alabama who was shot and killed, but I found myself wondering if someone in one of the buildings we walked by might decide to take some potshots at us, and what was I, a widow with four young children, doing by participating in this event? Even in the north, there were many angry people, upset that "they" were demanding equal rights.
It's hard to believe that was fifty years ago. It's also hard to believe that the struggle goes on, and that there is no Martin Luther King, Jr. to provide the kind of leadership we all need.

Posted by Guenveur in Kent at 6:41 PM No comments:

We had a terrific two weeks with Polly home  foe a longer visit than usual.as I wrote in a previous post, she did a fine job decorating the Christmas shrub. She and John cooked the Christmas dinner, and she continued to turn out tasty meals during her stay. I am not an enthusiastic meal preparer. The Joy of Cooking is not part of my makeup. I cook because one must eat. Polly, on the other hand, can put a meal together from nothing. Several times during her stay she would wander out to the kitchen, explore the refrigerator and the cupboard and surprise us with a delicious curry, roasted herbed vegetables, soup, or quiche, all while whistling a merry  tune or two. She's like one of those TV chefs who are challenged with making a feast with three ingredients. It was a lovely treat, and it was a treat to have her here, good food or not.
The award season is upon us. So far I have seen most of the promising films, all of them very good, but very grim and gloomy. I am trying to figure out why the Golden Globes people categorized "Birdman" as a comedy, unless they consider angst funny. Michael Keaton was superb, but comedy it was not. Another top film, "Foxcatcher" is unrelentingly grim, but Steve Carell is brilliant and either he or Keaton should win the Oscar. However, the Globe award went to Eddie Redmayne for doing Stephen  Hawking. This is what I call the "My Left Foot Sympathy" award. It goes back a long way, with Jane Wyman (better known as Ronald Reagan's first wife) winning by playing a deaf-mute rape victim requiring her more-or- lass to emulate silent film actors. Then there was Daniel Day Lewis, then Tom Hanks' dreadful Forrest Gump ( A real "What were they thinking?"  choice.)' and now Eddie, who did an excellent job of slumping in a wheel chair. Of course, I cannot deny that he also brought to life Hawking as a brilliant and human person. "The Imagination Game" was disappointing to me, mainly for that kind of overdone soundtrack that tells you how to feel. The crowning insult was when the hero cracks the code and there's this damn swelling chord ( only absent a choir) that makes it seem like the Second Coming. PBS did the same story years ago with Derek Jacobi that was quite good and much more moving without any soundtrack to underline every emotion. You can see it on YouTube.
I haven't seen "Big Eyes" or "Into the Woods" yet, and missed out on "Boyhood" completely. The most fun movie was Wes Anderson's "Budapest Hotel," which was the most clever of all and I'm glad that it won a Globe award as the best comedy, because it was a comedy and hilarious.
I was thinking of the general grimness of this year's crop compared to last year's  F-word laced but
funny top films. Why such downers this year? After seeing several, I found two movies on Netflix that were good antidotes for the depressing flicks of this year: " Moonstruck," and "Shall We Dance?" Cheered me up no end. 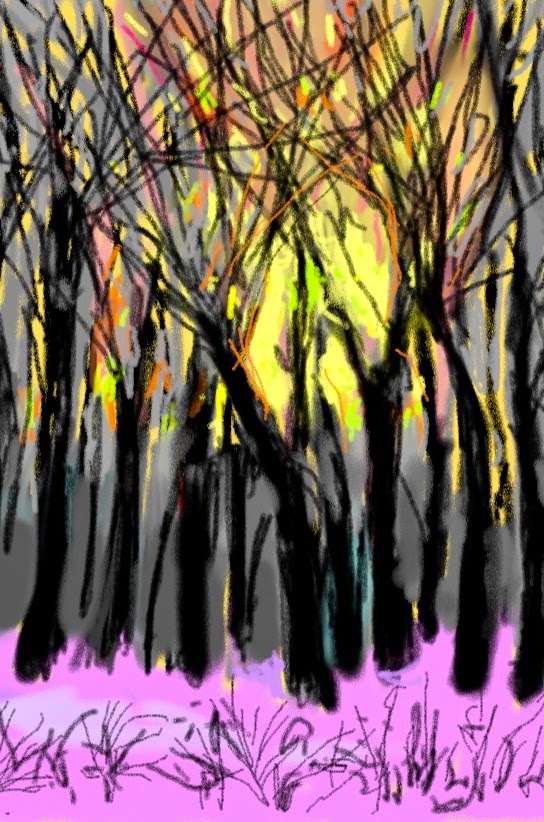 This is the view from my front window today. Winter is in full swing. It was one degree when
I got up this morning. However, the sun shines, the sky is blue, and so are people's noses.
Posted by Guenveur in Kent at 3:00 PM No comments: