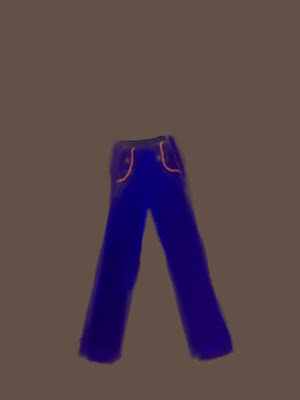 My last pair of non-fashionable blue jeans, the kind with an elastic waist, gave up the ghost a few months ago. I had been searching for a replacement for some time at the usual haunts: Macy's, K-Mart and - ugh- Walmart. No one seemed to carry them any more.I prefer jeans to other kinds of slacks, or as my Brit friend Helen calls thenm "trousers." I have other pants, cotton knit and corduroy, for instnace. What I like about denim, however, is that you can swipe your wet hands over them without fear of destroying the fabric. Jeans are work worthy clothing. I don't care if they are in fashion or out of fashion so long as they are made from that sturdy denim and fit reasonably well. I have no waistline anymore.My butt looks large no matter what I'm wearing. Saturday I persuaded Sally to take me shopping at Walmart, mainly because groceries are just getting so expensive these days. I relaize that I am being un-American, but the budget can only stretch so far and the big store has good produce and good meat and I knew I could save almost half of what I have beebn spending. On the way to the grocery part of the huge place, I ambled through the women's department, and lo! and behold! there were the very jeans for which I had been searching.They had y size (noine of yer bidness) and I bought two pairs. They should ladst at least as long as I do. NOTE: Nancy from Near Philadelphia solved my picture problem handily, for which I thank her profusely.
Posted by Guenveur in Kent at 2:32 PM 1 comment: 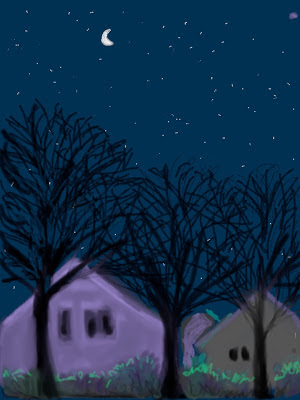 My doctor sent me to an allergist. The allergist looked up my nose and declared it a mess, sinus-wise. He prescribed a strong antibiotic to attack and clear up the mess. In spite of being careful and ingesting buttermilk to provide my guts with good bacteria which the antibiotic was attacking along with bad bacteria, I ended up with C-dif and a couple of days in the hospital tethered to an IV machine which allowed me to travel as far as the bathroom, which, fortunately, was the only place I really needed to go. All staff entering my room had to glove and gown up, especially if they had to touch me. I was a regular Typhoid Mary. Once the main symptom, which I really don’t wan to go into, subsided, I was able to be set free.


My doctor makes his rounds in the evening, unlike normal docs, who come in the morning. So I had a whole day to wait for him to show up. I had my IPad with me, so I started to watch “The Tudors” (via Netflix) an extremely cheesy, inaccurate drama about Henry VIII’s sex life, which was extensive. And must have been exhausting, in the days before energy drinks. After a while I got bored with this, played a few rounds of solitaire, got bored with that and waited for the doc to show up to set me free. I sort of threatened to break out and they finally got him to come in.  I didn’t get out of there until almost 8 o’clock.


I am now taking another antibiotic And feel fine, eating yogurt to stave off any gut reactions and have no interest in what has happened to Henry VIII. I believe he married many women, beheading some, divorcing the lucky ones.


When I got home, this is what the sky looked like. I haven’s seen so many stars in ages. It was a clear, cold night and if I’d gotten out of the hospital when I wanted to, I’d have missed it.


Well, Google in all its wisdom has screwed up the way I donwload pix, which I draw and store on my desktop and do not give mne a way to download them onto the post. Take my word for it, it is really nice.
Posted by Guenveur in Kent at 6:23 PM 3 comments: