Well, I stayed up last night to watch the Academy Awards, wondering why I was doing it. Habit, I guess. Very few surprises, of course, except that one of my favorite performances of the year won the best actress award for Marion Cotillard who played Edith Piaf. There are probably not many people around these days who even know who Piaf was, but she was very popular back in the early 50s. When I was in college, her "La Vie en Rose" was a big hit. She personified Paris, smoky cabarets, romance and sex to a lot of us who dreamed of going to France and becoming something great - an artist, writer, Apache dancer or actor. Well, I never did that, of course, but I did practice blowing a sophisticated stream of cigarette smoke out of my mouth and into my nose the way I was sure a bored Parisian would. I have chronic sinusitis to show for it.
As predicted by all the critics, Daniel Day Lewis won for his John Huston impersonation. In a few years, 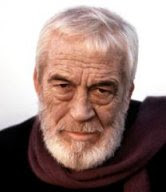 the academy members are going to be asking themselves, "What were we thinking?" I think he's a fine actor - loved the Left Foot gig, the aesthete snob in "Room With a View", the Irish rebel in "The Name of the Father", etc. but I think this performance in "There Will Be Blood" was just overdone and false. But what do I know?
I had seen just about all of the movies except for "No Country for Old Men" which I am assured by everyone is a very good movie, even with a crazed serial killer played by an actor who obviously loves him Mum. I may have to see it. I do like the Coen brothers movies.
I was glad to see that the young woman who wrote "Juno" won a writing award. It's one of my favorite movies of the year. Another one I love, which wasn't even nominated, was "The Darjeeling Limited" by Wes Anderson. It has occurred to me that Anderson is the new J.D. Salinger, using film instead of text. "The Royal Tannebaums" is another version of the Glass family, as are the brothers in "Darjeeling". The kid in "Rushmore" is latter day Holden Caulfield. There's probably a PhD dissertation in there somewhere. Think about it.
Posted by Guenveur in Kent at 6:54 PM