I'm On the Bus 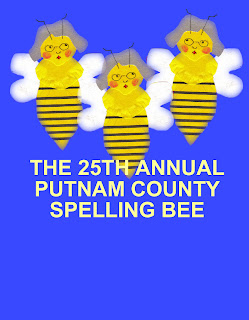 When I used to be on a trip, I would shudder if I pulled into a restaurant parking lot and saw a huge bus disgorging a load of geezers. But, hey, now I am one of those geezers. There's a local man who runs a very nice travel service which takes people to interesting places. Among those places are theaters in Cleveland to see road company productions of Broadway plays. We have a nice dinner at the Pufferbelly Restaurant in Kent, with special off-the-menu dishes, and then we're off to the big city. Since I don't like to drive out of town at night this is ideal.

Last night we went to see "The 25th Annual Putnam County Spelling Bee". Fresh from my triumphant third place finish in the local 4th Annual Portage County Senior Spelling Bee, I wanted to check out the competition. I had read the reviews when it was in New York and had seen a snippet of it during the Tony Awards Show on TV. Having also seen "Spellbound", a documentary about the national student bee, I was anxious to see how they would present the pretty weird kids without being cruel.
Well, it is hilarious and touching at the same time. Yes, the kids were stereotyped, but it wouldn't be the spelling bee if they had not used them. The kids knew who and what they were and made you laugh and feel empathy at the same time. There were so many great lines and a lot of it seemed spontaneous. Four people from the audience had been chosen beforehand to participate and they seemed to be having a great time, too. My favorite among the cast was a character named "Barfee", pronounced "Bar -FAY" ( a bit like Hyacinth Boo-kay), who spelled out the words with his foot - ya hadda be there to get it. Anyway, it was a laugh-fest. I think they had to use very short people in the cast because they all looked and sounded like kids.
On the way home I heard the woman behind me on the bus say, "Well, that was cute," as if it had been a bit beneath her. Maybe she was expecting Chekhov? There is something about the word "cute" that is very diminishing. Again, ya probably hadda be there to know what I mean. But the actors in the play were cute, too. And not in a diminishing way, of course. Because I said it.

Posted by Guenveur in Kent at 6:42 PM

Oh, I'm SO glad you enjoyed it! I could cheerfully see it again.

My sister was one of the audience participants when she saw it in New York. She had her granddaughters along and they were dazzled.