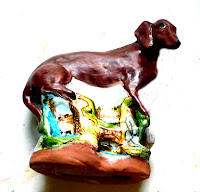 It's been a busy month since my last post. I had a birthday in the middle of the month which began with a 6 a.m. phone call from Australia, where Emily and her family are visiting Chris' family. That was fun, and as an extra I was serenaded with the Happy Birthday song from down under, courtesy of Chris' sister Ann. Emily reports that they are having the coldest winter there in years. They should be heading back to Germany in the next week or so, stopping in Dubai for a few days where it is 110 degrees in the shade - except that there isn't much shade.
Polly sent me one of her sculptures and a Beatrix Potter plate she got at a yard sale from the NPR Paris correspondent Alice Furlow - a perfect obscure connection to fame. Polly's sculptures are fascinating small pieces that you can keep looking at and finding new things. The photograph does not do this one justice. There are stories in them. I love having this treasure. If you want to see more of Polly's work, you can find it here.
We had a jolly birthday dinner at the Pufferbelly, after which there was a concert in
the square featuring my friend Helen, the Brit songbird. She had a fine jazz quartet behind her. She did a special number for me, her lovely version of "Over the Rainbow". When she was singing the words, "Birds fly over the rainbow",  way up high above the stage a group of birds went flying over - a little bit of unplanned magic. All, in all, a fine day to be a year older. 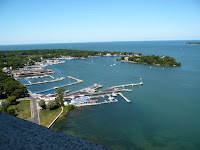 Lat week I went on another geezer tour, this time to Put-in-Bay up on lake Erie. I hadn't been there for at least 20 years and it was another one of those perfect August days, with a clear blue sky and a gentle breeze. I was happy to find that old friends Pat and John Balazs, were also along which made it more fun, especially since I didn't know anyone else on the bus. When our children were young we spent a lot of time together, but as they got older and Pat and I both started working, we hardly saw each other over the years. We still have a lot to talk and laugh about. Pat
still remembers shopping trip we took to Akron years ago and my amazement at what an intense and persistent shopper she can be. I remembered exactly how many pumpkin colored sweaters she looked at before deciding on one - and she still has it. It was the first time I had driven to Akron - I had just gotten my license a few months before, and all I could think of was that I had the trip back to Kent ahead of me. Put-in Bay is a beautiful place and we toured the entire island in our own touristy tram with a guide narrating the hot spots. One of these spots was a winery and I was the lucky winner of a gift basket. When I got home I unwrapped the cellophane covering and discovered three outrageously scented candles, which I had to dispose of before my house smelled like a bordello (not that I've ever been in one), some made-in-Ohio foodstuffs and a bottle of sweet Catawba wine which I'll have to be pretty desperate to drink. But it was, as we used to say, a pretty fun day.
I have more to say, but I have laundry to hang out and a sick cat (he had some shots and flea medication yesterday and it's made him a tad puny), so I"ll write abut the great Randolph Fair later.
Posted by Guenveur in Kent at 12:45 PM

So how is the poor beast faring after his medical ordeal? Last night he looked like he was falling asleep standing, poor baby. I kept wondering if he wanted to go upstairs but lacked the strength or just wanted to curl up in a chair or on top of the sofa but lacked the stamina to do so. I almost wanted to pick him up and place him in a chair or on the sofa to see if that's what he wanted to do. I just hope he makes a full recovery.

No vet worth their salt would give so much medication at once to such an elderly cat. Like people, elderly animals can't take high doses of meds. If they'd been paying attention, they would have seen that he's a 14 year old cat, positively ancient in cat years. I just wish old Dr. Beutel was still alive. That would never have happened had the cat been taken to the old Banks and Beutel veterinary clinic (now Memorial Veterinary Clinic, in honor of Dr. Beutel).