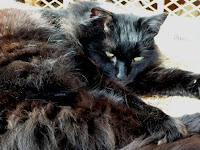 A couple of blog posts ago I mentioned that Dupree the cat was feeling poorly (Midwestern for "sick"). He is quite old now, even older than I in cat years. He had two shots and an application of flea medicine which was too much for his delicate constitution apparently. The result was that he was totally wiped out. He could barely walk, couldn't eat, and spent all his time under the arbor vitae tree out front, where he has a sort of nest.
We would periodically check on him to make sure he was still breathing. Since he was under this very thick fir tree and he is black, it was hard to see him, and we had to sort of crawl through the branches before we could find out if he was still alive. He would not stay in the house at all. All could think of is how animals tend to creep away when they are dying.
As soon  as the weekend was over, John called the vet, who told him that some cats can have an allergic reaction to the flea medication. Who knew that? She said as long as he was eating he was going to be all right. But he wasn't eating, and this is a cat which can drive you crazy with demands for food, especially when you are busy with something else far from the kitchen.
After two days he staggered into the house and ate a bit and drank some water. He then went back to his nest under the tree, but it was a good sign. Gradually he started to come inside and eat a little more and then a lot more and now he is recovered. John has decided to let the fleas have him rather than ever go through this again.
Dupree's health problems distracted me from Democratic convention, but I do know that Obama was enthroned and I did listen to his very fine speech. Now I can ignore the Republican convention with impunity. It doesn't take a sick cat to keep me from watching McCain and his beauty queen vice presidential choice. That is the most cynical political move since Bush I appointed Clarence Thomas to the Supreme Court. Those clueless Republicans!
Posted by Guenveur in Kent at 4:04 PM

Preach it, Sister! Preach it!

Oh, the poor cat, and poor you. It is so painful to watch a beloved elderly pet decline. We've gone through it enough times that one would think we'd have the sense to stop getting pets.

But, of course, we'd miss the joys.

Glad to hear that the blessed beast is doing better. He seemed a lot better when I was over on Sunday night, as opposed to last Tuesday night when he seemed to almost fall asleep on his feet. Poor elderly beast. He's getting up there in cat years and one can only hope that he lasts just a bit longer, but oh, how I know we will all miss his fuzzy little attitude when he's gone......he's been such a wonderful addition to the Burnell house in spite of his often annoying habits!