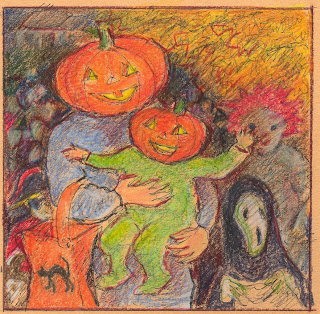 Beggar's Night is no more. It is now on the Sunday afternoon before actual Halloween. Since we live on a dead-end street, only one and a half blocks long, this is a very popular spot for hoards of costumed urchins, dropped off by parents in pick-up trucks from all over the county. I don't mind this particularly, because there are not so many children living on this street as in the past. When my children were that age there were over 60 children just on this block. There were, of course, many Catholic families here (along with a few fertile and careless Protestants), since it is close to both the church and the school. We were the greatest generation indeed. Or the greatest generators.

The costumes are always interesting and indicative of current pop culture. A tubby little girl wearing a long, blond, curly wig appeared on the doorstep, accompanied by another little girl with a head set on. 'Oh, are you Cinderella, or Goldilocks?" I asked, innocently. Blondie, looking puzzled, replied, "I'm not either of those people." "She's (some name) from 'High School Musical', and her sister here is Miley Cyrus," piped up their mother proudly. Fortunately, they were followed by two Dorothys from "The Wizard of Oz," which was nice to see. And there were a number of princesses, probably with names from Disney movies, but I didn't want to know that. I could at least pretend that maybe their parents read to them once in awhile.

My main complaint is that people bring their infants in arms along and hold out a bag to fill with candy for them. I wanted to do a W.C. Fields on them: "Do you honestly intend for that toothless spawn of your loins to ingest this sugary, choking hazard treat? Have you no sense of decency? Are you totally clueless about what is proper for that helpless costumed lump dressed as an alligator which you are holding in your arms?" I almost did when this guy holding an infant whose mouth was plugged with a pacifier held out a bag. I asked,"Does this baby eat this kind of stuff?" "Of course," he said, smiling broadly. Right.

Who are these people? I expect they are the same people who bring their toddlers to slasher movies. Or a screaming two year old to the restaurant where you are trying to have a quiet meal and a glass of wine. Or take their six year olds to rock concerts. There's a whole generation of clueless parents out there who themselves are devotees of instant gratification and push their children into activities they're not ready to really enjoy.

Good grief, I sound like one of those old ladies who inhabit every neighborhood I've ever lived in -the ones who threaten to call the police if a child so much as puts one foot into their yard. Old Mrs. Cole here on Edgewood Dr. threatened to do that, so every time the kids walked by her house, they would put one foot into her yard just to see what would happen. Well, I don't care if kids run through my yard or play outside and make noise. There are so few kids here now that it's a joy just to hear them once in a while. That's why I enjoy even the watered down Beggars' Night Sunday Afternoon once a year. It's their former kid parents that I want to call the police on when they set foot in my yard begging for treats for babies.
Posted by Guenveur in Kent at 3:55 PM

I think I have more patience for the tiny kids than for the fifteen year olds with no costumes. They know (or, at least I suspect that they know) that I'll give them candy because I don't want my windows egged. On the other hand, by 15 you can buy your own costumes or, at least, lie cleverly on the spot... maybe even buy your own candy.

re: your earliest post - I have only heard Salome, not seen it, but hope toone day.