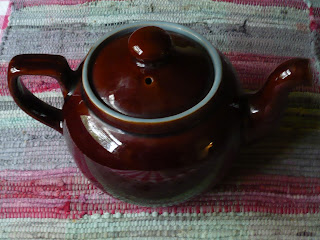 A while back I wrote about some of my favorite kitchen things and plumb forgot a very important item. It used to be easy to find a brown pottery tea pot, even at the five and ten. When my last one bit the dust, back in the early seventies, there was not one to be found. When Polly made her first trip to Europe, which was going to include (the Brits are very clear about not being in Europe which is a place they got to on holiday), I asked her if she could bring me back one if she happened to check out a Woolworth’s in .


What she brought back was not a five and dime tea pot. It’s a beautiful Derby Stoneware pot with a light blue lining. It makes great tea. I bought it a tea cozy at a Woolworth’s in in about ten years ago. That’s another thing that was hard to find over here. Just about the tie that cozy became threadbare, my friend jay knitted me a charming number that the tea pot and I just love.


My shiny brown pot is now almost forty years old and looks like new. I think with all the trendy kitchen shops now tucked into every mall, one can probably find a brown pottery pot (not china, but pottery), but I treasure this one.
Posted by Guenveur in Kent at 12:07 PM