The ThIngs We Carry 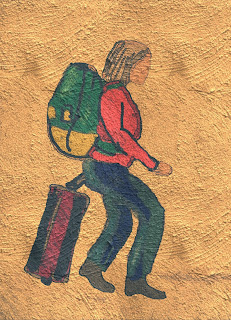 My brother Ed and I talked the other day via Facetime, just before he and his wife took off for a tour of . He talked about packing for the trip and we discussed how to manage with a minimum of bulky luggage. He mentioned that once he picked our older brother Bill up at the airport when Bill was returning from a 10 day trip to . Bill greeted him at the terminal carrying a gym bag. When Ed suggested that they go to pick up his luggage. Bill lifted the gym bag. “This is it,” he said. He said he accompanied him to the car, with Bill downwind.


The first time I went to Europe, I consulted my sister, who has been on every continent except . She told me to pack my bag, wait a few minutes and then take half of it out. I was traveling with my friend Susan, who had been abroad several times. She had 5 weeks off from her doctoral studies at , and I had recently retired from my job at Townhall ll. My main objective was to visit my daughter in , but I also wanted to go to and with a stop off in where y friend Ethel had been living since college. Susan had the great idea of our using Back packs for every day necessities, plus clean socks and underwear as carry-ons. I packed a lot of dark colored clothes. We were pretty much winging it after . We had Eurail passes, which in those days were good for where ever you wanted to go.


We traveled like students, basically. No fancy hotels, no posh restaurants. We had an apartment in , where we could cook Wearing black turtleneck shirts with a fancy scarf got us through a few concerts and stage plays. We ferried over to the continent, took a train to and took off for with only our backpacks, leaving our suitcases with Emily.


In , we found a pensione and our room with a view was a bus station, but who cared. My friend Ethel took us to a wonderful fondue place in and we walked through strings of fairy lights decorating the streets for Christmas.


Back in , we had a great time eating good food and enjoying the lovely town and 1 year old Katina. And washing out a few clothes.


Besides being very tired of the same old clothes, the mobility afforded by packing light paid off as we boarded buses, trains and cabs. Since then I have always traveled light, even leaving clothes behind. We stayed in a B.and B. in once where the Breakfast servers all seemed to have recently arrived from , or some other war-torn country. I left a nice cardigan I was sick of, a tee shirt and a nightgown. I’ve done that several times in various places in . Some entrepreneur should come up with disposable clothes for travelers. Several times, Susan and I have rented cottages, which work out well, since one has the advantage of a washer and dryer right there if you can figure out how to use them.


I have never gone so far as my brother, carrying only a gym bag, but if one can get away with it, it’s not a bad idea.
The illustration above has been enhanced by a terrific app I downloaded on my IPad, called PaperArtist. I do my blog illustrations these days on the IPad, with a couple of paint programs apps I have downloaded. I used to do the drawings and scan them, but now I can do it all on the computer.
Posted by Guenveur in Kent at 5:10 PM

This is a good skill to have, the light packing. Of course, your adored son-in-law is the ultimate expert in this, traveling home to Australia for a month with one tiny carry-on. Then again, he doesn't love clothes and shoes as much as his wife and daughters. But, because of him, we've all learned to keep it simple when travelling. Love the illustration!

You are very smart. On our recent 2-1/2 week trip, we got by with a carry-on and a backpack apiece. I'd love to get to the gym bag stage but don't think that will happen.