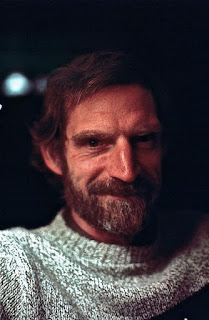 A week ago, only  last Friday, I spent the day at his home in Kettering, Ohio. Two weeks before that, he had been diagnosed with stage 4 metastatic lung cancer. He had been told that with chemo he could live for at least a year; without chemo he had about 6 months. As a doctor, he knew a lot about what chemo could be like. At the time he told me that he was having a hard time processing the whole idea of being told he had a fatal disease.
A week later, having chosen chemo, the morning he was to start, he changed his mind., and asked his wife Marian to call hospice. When I arrived Friday morning, the first thing he said to me was, "This is surreal." The second thing he said was, "I'm disappointed. It's not supposed to be like this." He wanted it to be over. He remembered how it had been with our father. Two weeks after he had been diagnosed with lymphoma, he passed quietly away. Michael had told me that he hoped he could do the same. However, Michael's mind was ready to go, but his body was not.
When I got the message this past Tuesday that his struggle was over, I was relieved for him, but surprised that it had happened so quickly.  It is said that the mind is a powerful engine of the human spirit. I think his will was stronger than the disease.
Michael was eight years younger than I. I told him during that last visit that I forgave him for displacing my role as the baby of the family, a role I had enjoyed all those eight years. He was this little red, scrawny baby and not at all interesting those first few months. Soon enough he turned into this pink cheeked , blue- eyed cherub with soft blond curls.  (Less than two years later his role as the baby of the family was ended with the arrival of Edward, who still has that position.)
We were living in Atlanta during this time. Somewhere there is an adorable picture of Michael sitting  in a little rocking chair, with a very serious look on his face. I remember him as a fairly quiet child, rather sober, and always sensitive. Mother's Southern lady friends made a fuss over him and pronounced his name  "Mike-e-all."
When he was four and a half and Edward was just three, our father got a new job in Ohio. They saw their first snow. They still had their little southern accents. I spent a lot of time with these two little boys, since I had not met any friends the first year, because the school I went to was far away from the neighborhood we lived in. They were very good company, those two little blond  boys.
Moving to the present, Michael,  the former baby brother, grew into one of the kindest,  gentlest of men. He never lost the boy in him, which made for an interesting and loving father and grandfather. He never stopped learning and exploring the complexities of life. He still found wonder in nature, science, history art and music. He told me once that he regretted spending his time at Notre Dame in pre-med. H e said that only taught him how to get into med school. He wished he had studied the humanities. He made up for that, though. He read constantly, fiction, non- fiction, loved  good movies - especially Turner Classic Movies on TV, loved toys, and basketball. Although he had retired from his medical practice, he kept up with current information in other  fields  besides orthopedics.
His passing leaves an empty space in the family, but with many loving, pleasant memories of this fine husband, father, grandfather, brother, uncle, friend, healer, little blond boy and great  human being called Michael.

Since I wrote this post, I have received the picture of little Michael below, thanks to one of his grandsons. 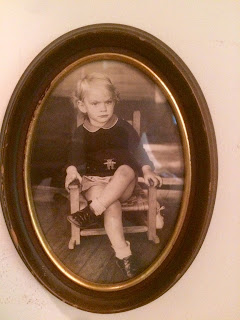 Posted by Guenveur in Kent at 5:41 PM