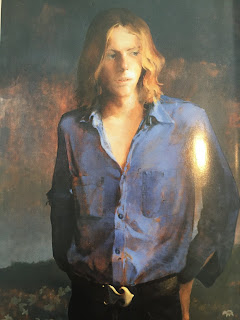 This is a portrait of my nephew, Luke Walker. I first saw it in the Arnot Art Museum in Elmira, to which my sister took me to see it. It is by Thomas Beuchner, a New York state painter. I bought a museum catalog so I could keep a copy of this very fine portrait. I didn't see Luke at this age, and the last time I had seen him, he had been a little blond boy of seven. Our families lived 300 miles apart, and in those days when my sister and I were raising kids (her 8 in western New York and my 4 in northeastern Ohio) we didn't do much visiting.
Barely two weeks ago, Luke died as a result of an accident in his workshop in Rhode Island. An expert craftsman, a machinist, an artist, a carpenter, a restorer of antique motorcycles and airplanes, a biker, a pilot, a multi talented  man.
He had met his wife Bess at Rochester Institute of Technology some 30 years ago. They had settled in Rhode Island, in the Newport area, Bess as a seamstress and decorator, Luke as an all around genius at all of the above. They were a very important part of the community and their work was and is very much in demand. Twenty two years ago their daughter Jackie was born, now a beautiful and gifted horsewoman.
That little blond boy I knew all those years ago had impressed our family even then. It's become a family story that foretold what he would become. While we were visiting, one of the children found a dea bird  in the back yard. Luke disappeared into the basement. An hour or so later he returned with a little wooden box he had built as a coffin for that bird. If you don't know woodworking, a box is one  of the hardest things to make, requiring precise measurements and the ability to cut and join the pieces correctly. As I said, he was seven.
One of his older brothers told me that he and the others in the family called Luke whenever they had a problem with a project, for advice and he was always right on it, and knew exactly what needed to be done.
Three years ago, Luke was in a terrible accident. A woman turned left in front of him as he was on his motorcycle. He was very badly injured, and suffered the partial loss of one of his legs and a traumatic brain injury. He fought very hard to recover, with the help and love of Bess and family. It was an epic struggle, and he was strong. He took up painting and ceramics and developed his artistic side.
The last time I talked with him was last year, when he called me on my birthday. He always kept track of birthdays.
Part of a large, close family, Luke's death leaves a huge gap that there's no way to fill, but everyone treasures the impact he had on each life he touched. The world needs people like Luke, makers and restorers of beautiful things, now lasting objects of his life's work. And that's a good thing.
Posted by Guenveur in Kent at 7:41 PM