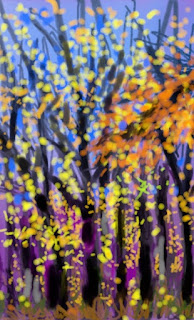 So I suddenly realized that November is ending today and I have not written one post. The same thing happened in October. I had spent a lot of time dealing with itch mites from my pin oak tree and a broken foot. As a result I had nothing much to write about., not that my life is usually rife with exciting adventures.
The recent election has left me stunned and confused. I have, in past tears been greatly disappointed in the past with presidential election outcomes, but not feeling horrified, a much mote profound emotion. I read the opinion pieces in the newspapers every day. Rarely watch TV News, except for Friday night's Wahington Week. I have no "friends" on Facebook  or in real life who are Trump people. Many Conservative pundits in print seem as horrified as I am. I do live in a bubble here in this university community.
I hear about the many hard working  mostly white, mostly male blue collar folks who feel left out of the mainstream, but that doesn't seem to me to account for the outcome. It won't be the first time that people have voted against their own self interest.
Oldest daughter Polly was home for Thanksgiving which brightened up our lives here. She, too, lives in a bubble, in a New England town noted for its artists, poets, writers, actors and playwrights, and others who make their livings in the creative community. We had a lit of discussions about the election and one conclusion is that as a nation, we are a people with a serious lack of critical thinking skills. We claim to care about education, but we don't really. We call educated people the 'elite," a word formerly used to describe the wealthy and aristocratic. I'm not sure what the opposite label is - knuckle-drag gears? - but somehow "elite" doesn't have the right ring to it. I remember when the word "intellectual" was used to describe educated people, usually used by pres
Posted by Guenveur in Kent at 10:33 PM