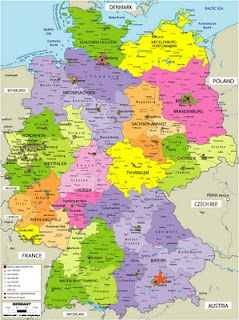 In other words, Graduation Day. It started off in typical Burnell-Petrou disorganized fashion. First of all, I had to wake Katina up for school as I slept in myself...I was wondering why she was still in bed at 8:15 when school normally begins. But it turns out it didn't start until 9 a.m. Katina acted like it was no big deal - according to her, she just had to show up at school, pick up her final report card, give a gift to her teacher and have a glass of champagne. No formal ceremony, no parents. Well...thank God she asked me to drive her to school (it was raining, and god forbid her natural curls show up) because it was then that I saw hordes of dirndl clad mothers and daughters approaching the school. Totally bedraggled, unshowered and still in my pajamas, I asked her, "Wait...are parents supposed to be at this thing?" To which she slowly replied, "Um...I don't know...I didn't think so..." As if that weren't bad enough, the road to the school was blocked by Gymnasium brats blocking the way, going so far as to SIT ON MY CAR, refusing to move until I PAID them. WTF? I pleaded with the little f---ers that my daughter needed to get to her graduation, to which they just scoffed, "Too bad, pay us and we'll move". I could have throttled the privileged pimply faced brats. Apparently it's a custom for them to do this, to belittle the Realschule where Katina goes, to point out their "superiority" as Gymnasium students. As many of you know, Katina spent the majority of her high school education at Gymnasium, and this further justified my hatred of the place. I told them I had no money (again, no mercy, just braying laughter) and then I dug out a few cents from my wallet and threw it into the sweaty palms of the ringleader. By then, Katina had already fled the car in fury and impatience. I flew home, took the quickest shower of my life, threw on some nice duds and rode in the pouring rain on my bike to the school. Which was empty, because everyone was shoved into the airless church nearby. There was an endless mass going on which went on for an hour, full of that sort of droning folk music that makes you weak in the knees with misery and exhaustion. When that finally ended, we poured into the school, where the requisite glasses of Sekt and Mimosas were offered. In true Eileen Heckart fashion, I swilled a glass of Sekt, followed by a Mimosa, and threw some pretzel stix down my throat, realizing with horror that I hadn't even brushed my teeth yet, and my breath reeked of a combination of a dead mouse and garlic (perhaps THIS is the reason Katina doesn't inform us of school events?). Anyway, at this point I met up with Katina, who was surrounded by mama- and paparazzi snapping pix of their clique - of course, the parents all knew each other, and probably have for years, and one woman came up to me with a thick Bavarian accent and said, "Oh, I wondered who you belonged to!" (I said to Katina, "Story of my life.") Then we were rather unwillingly herded back to the church for more long winded speeches and folk music, but this time I was lucky to nab a seat in what appeared to be the foreigner section - i.e., the other 'garlic munchers' (as Chris and his siblings were called growing up in Anglo Australia). I dozed on and off while the speakers, in love with the sound of their own voices, wore us all to the ground. Give a German a microphone and purgatory ensues. Anyway, finally the wilting girls were given their diplomas, parental videocameras whirring, cameras clicking.
This dispatch contained a photo of Katina and some of her classmates. I am not using it because this blog is available to anyone who chances upon it. Needless to say, these are attractive young women and I don't like the idea of some creep drooling over a photo of them, especially Katina.
Posted by Guenveur in Kent at 11:53 AM