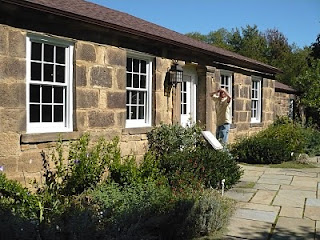 In spite of the drought which is turning the trees too early, we've had some lovely days this month. The corn stalks in the fields are already that dry tan hue, and they rattle in the breeze. The colors of the tree leaves are pale tans and faded reds rather than the bright golds, deep reds and oranges that should come in October. I fear we won't have that this year. However the sky is brilliant cobalt and the golden rod blazes in the fields.

Saturday I drove up to Rafael's bakery and took a different set of roads to get there. It was just beautiful: rows of white fenced meadows and neat farms, views for miles from the top of rolling hills. As I approached the village where his bakery is, it looked as if I were in New England, with the little church's white steeple poking up above the trees. I had never come to the village from that direction, so it was as if I were discovering it for the first time. I bought a loaf of his sweet bread, which has blueberries and strawberries studding the round loaf. Great with tea in the afternoon.
Yesterday, John and I drove up to Lake County to explore two historic sites. The first was the Kirtland Temple, built in 1833 by the followers of Joseph Smith, one of the founders of the Church of the Latter Day Saints. It is one of the most beautiful buildings I have ever been in. I am in awe of those early craftsmen, who did everything by hand. Every aspect of it it is so graceful and symmetrical. We were not allowed to take any pictures inside, unfortunately. The top floor is the educational area, and consists of these absolutely perfect connecting classrooms, so that when you look through the door of the last one, back into the first thee rooms, it's almost like looking through a mirror at a reflection of a series of doorways. Maybe you hadda b e there.
The downside of the tour is that you have to listen to the fantastic story of their religion. An angel named Maroni? At the dedication of the temple, there were flaming people dancing on the roof, dropping down from the sky, and Jesus came into the main room, as did a few of those Old Testament prophets, like Isaiah and all. Since all religions have their fantasies, I guess this one isn't all that ridiculous. But, an angel named Maroni? The first time I toured there, a number of years ago, I asked the guide who the architect was, and she said, "God." This time the guide told us that a number of skilled craftsman built it and that they used Jonathan Goldsmith's ( a Western Reserve 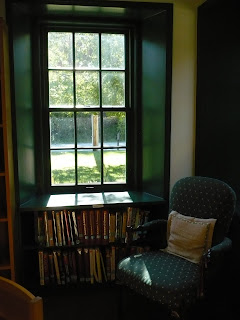 architect of the 18th -early 19th century whose beautiful homes are still around) pattern books. It is an amazing edifice, that Temple, and I am sure that God would like it very much.
Next we went out the Kirtland-Chardon Road to explore a house that is in one of my books on Western Reserve architecture, which John wanted to see. It's a stone farmhouse, built around the same time ass the Temple. John went to a part f Canada this summer, to a small town called Cambridge, which had bee settled by Scottish stonemasons. It was a stone mason's paradise, and he was particularly intrigued by a certain style of cottage. Regent style?
The house we went to see is almost an exact replica of those kinds of cottages. It has bee re-habbed by the Herb Society of America and is now their national headquarters, a perfect fit for such an organization. It had been abandoned for a number of years, so they have had t o do a lot of work on it. In the early 20th century it had been owned by the architect (Hubbell) who designed the Cleveland Museum of Art and the West Side Market. He had made a few additions in the 20s, but had not disturbed the basic integrity of the building. The librarian showed John all through it, basement to attic, while I sat and enjoyed the sun shining through the windows. (Which reminds me: the glaziers of the Temple windows were none other than Brigham Young and his brother And all the inside windows still have their original glass panes!) It's a perfect sort of house, with two large front rooms and fine windows that bring in the light and give you a view of green things.
It was a good day to enjoy old buildings in the sun, especially in the Western Reserve, a little bit of old New England carved out off the forests of northeastern Ohio.
Posted by Guenveur in Kent at 3:51 PM