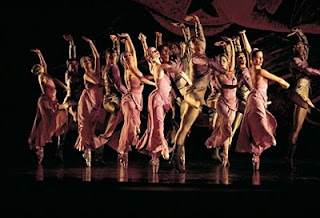 After not going to Blossom Center but once all summer, we ended with a flurry of visits, My friend Helen performed with the Blossom Festival Orchestra (the Cleveland Orchestra was touring Europe at the time) and gave me comp box seats for the performance. Box seats!! In all the years I've gone thee I've either sat on the lawn on on the hard seats in the pavilion. It was quite a treat to have nice cushioned seating. The program was "Music for the Greatest Generation," and it was geezer city there....never seen so many walkers, wheelchairs and three legged canes. A bus load of them came in late and it took them forever to find and get into their seats. Helen did a group of great songs from that time, looking quite glamorous in blue stain. Her Mun was there, too, visiting from England. I took Mum up to Amish country the next week and we had a great time. She's NOT a geezer, being a young 70 and quite ambulatory.
My poetry award provided tickets to the final Blossom Center programs for the year. It was the Joffrey Ballet, with the Cleveland Orchestra as the pit band. Not bad! The young dancers were just terrific. Such leaps! Such grace! Such athleticism, especially in the make dancers! The whole company was a collection of these perfect little bodies, with one rather tall make dancer who was a splendid Corsaire. The music varied from Tchaikovsky, Phillip Glass, to Gottschalk. There was a witty Tarantella, with choreography by the great Balanchine, which I would love to see again.
It was a beautiful evening to be at Blossom Center. It is a wonderful venue for listening to music or watching ballet. Years ago when the girls were little, I took them there to watch the New York City Ballet, with the likes of Edward Vilella and Jzacques D'Amboise at their peak. They did Balanchine's "Jewels," all glitter and agility - beautiful.
It's been a while since I've seen live ballet, other than "Nutcracker." I used to have a season ticket to the Akron Ballet, which was developed by Heinz Poll who was a choreographer whose ballets are still being done here and there. The company dissolved after he died and funding disappeared. Too sad. It's hard for a city the size of Akron to support the arts now, with all the big factories closing. The art museum and the symphony are both very well supported and are high quality, but 30 miles north are two of the top cultural organizations in the country which draw more of the available money for such things. We're lucky to have access to all of those things where we live, as well as the university's offerings.
Dupree
The day after I received news of winning the poetry contest, Dupree promptly went into a decliner. He stopped eating , lay under his arbor vita tree all day without moving, and looked as if he was not long for this world. John rushed him to the vet, who hydrated him and took some blood tests. The vet gave him a steroid shot also. He continued to lie about and not eat. John took him back to the vet the next day who took X-rays and told John that there was cancer in Dupree's stomach and lungs. John decided to get a second opinion and took him to another vet. That one found a lot of gum infection and pulled a couple of teeth and started him on a course of antibiotics. He is eating again and seems to be a lot better. He is 16, and up until now, he has been quite kittenish. I hope he'll be with us for a while longer.
Posted by Guenveur in Kent at 5:15 PM

Glad to hear the beloved beast is a bit better. I can't imagine the Burnell house without a cat, let alone Dupree. He's become as much a member of the family as any one of us.