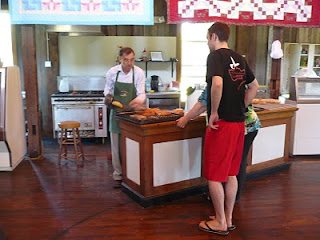 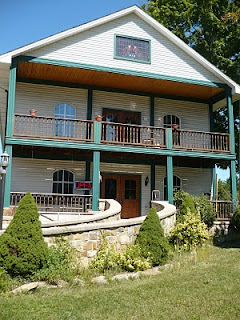 I have written about Rafael before. He is the Spanish charmer who sells bread at the local farmer's market. Last year he bought a wonderful old building in a little village called Nelson. His place is on the village circle, on which there is a white painted wooden church, a white painted town hall, a former grocery store, which is now dwelling of some sort and Rafel's building. It's the kind of village which makes me want a time machine, so I could see what it was like in the 19th century, when it was a center where local farmers came to shop, to attend school and church and to socialized and run the town in the village hall. That hall is now used for meetings, social gatherings(e.g., the Women's Literary Society) and monthly Swiss steak dinners of high quality.

There are four main county roads that meet at the circle, which is why it's a fine place to open a bakery. The building which Rafael owns has always been favorite of mine. It started early in the 19th century (1824) as a church or a town hall. For years and years of the late 20th century it was pretty much a wreck. About 30 or so years ago, a couple of piano builders bought it and restored it, repairing the roof and the siding and strengthening the floors and walls. They only stayed a short time, however. Then it was bought by a man who tried to make it into a sort of general store. He did some further restoration and added some attractive landscaping. That didn't last and it sat empty for a number of years until Rafael took it over last fall.
Rafael was a DJ in Spain. He met the American woman who is now his wife one night when she came to the disco. He told me he put a bunch of records on and took her out for a walk, leaving the music to play on without him. Is that romantic? Hell, yes. She teaches at Hiram College, but she has been quite ill since Rafael has been at our market. The new bakery is not too far from their home, which is convenient for both of them.
I went up there for the first time the other day. Rafael greeted me with a hug. He loves the acoustics in the shop, which is an open three stories, all wood, so he ran up to the balcony where his CD player is and put on a medieval choir CD, which filled the space beautifully. He said that he is very busy and sells out every day he is open. The place smells wonderful, since he makes all kinds of breads,, sweet breads, nut breads, gluten free breads, Spanish bread (which is French bread, but he is Spanish, so that's what he calls it.)
When I was leaving, a big, burly trick driver came in and greeted Rafael with a "bonas tardies," a regular customer. I found out that Rafael also raises sheep, has them sheared and spins his own wool; there's a little spinning wheel behind one of the counters. He also lets the local quilters hang their quilts from the balcony and he handles the sales for them. He loves the look of them, so he is most happy to oblige them. They do add a lovely touch to the place.
When I left, he hugged me and said to tell my daughters he loves them all. It's mutual.
Posted by Guenveur in Kent at 4:40 PM

Can you take me there the next time I visit? I'll be sure to wear the España T-shirt I bought for this year's World Cup games. Tell me Hola from Alemania when you see him again!