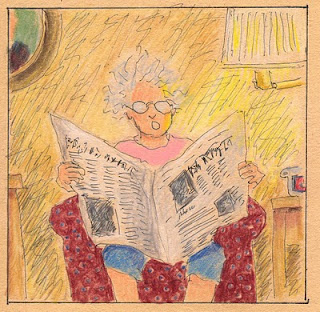 Maybe it's the heat. (After a few days of bearable temperatures, it's back to the 90s.) It's gotten so I find it very hard to read or listen to news. It's not just the wreckage of the lives and careers of folks living on the Gulf coast, or the floods in China and Pakistan, or the choking smog in Moscow,or the endless and futile war in Afghanistan. It's the little things that the media seem to think we need to know.

We're being over radiated by the medical professions. This is something I'd rather not know, having been radiated for six weeks last year after the breast surgery If you have fat around your abdomen, you're doomed to shorter life. (Shorter than 83?) As a former skinny person who gave birth to 4 kids in 6 years, I have developed a paunch, which is abdominal fat, of course. The amount of air pollution because of the heat is killing old people and people with breathing problems. I fit both categories. Is forgetfulness a sign of Alzheimer's or normal aging? Quick, what picture won an Academy Award for Best Movie in 2009? Ads for pharmaceutical products contain long lists of side-effects which sound worse than the condition they are supposed to treat, mostly disgusting things like diarrhea, nose bleeds and, rarely(hah!), sudden death.
There seems to be an endless stream of these little tidbits, almost all of which portend imminent death or disability. Well, dammit, it's just TOO FREAKING MUCH INFORMATION!
"Ignorance is bliss" may be a cliche, but it rings with truthiness. Bliss is hard enough to achieve with all the big things happening in the world - well, actually impossible - but I don't need all those terrifying little bits of stuff in addition.
Posted by Guenveur in Kent at 3:20 PM