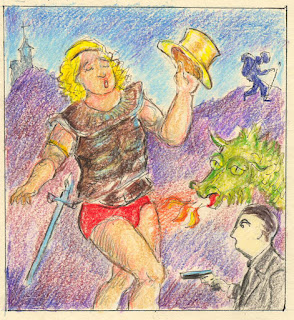 Good grief, Charlie Brown! Where has November gone? Right now I have a house full of company, most welcome, since they are all related to me by birth. This is the first time I have had all four adult children  home at the same time for Thanksgiving in over ten years. Having long meals, talking, laughing, arguing on occasion and generally  having a good time. I believe some singing is in order this evening. I shall probably retire early, since I had to get up early this morning to go to the retina guy, who is trying to retard the progress of macular degeneration. He is very sorry that I had to give up driving. Not his fault, I told him.
Well, before all of this I had a busy couple of weeks, music-wise and movie-wise. First of all, there was the live in HD Met production of "Siegfried," starring the wonderful Texan, Jay Hunter Morris. My ear for German is not that good , so I don't know if he sounded like a Texas German, or a German Texan. I only know that he has a terrific voice and looked great, all blond and tall and all. Even though it was six hours long, it went by in a flash. German mythology is about as wacky as most cultural mythology, with dragons and dwarfs and incestuous breeding and all  and Wagner was a virulent anti -Semitic  jerk, but he certainly could write some gorgeous music."Gotterdamerung" is coming up in February, with the same cast, so I think I'll catch that one, too, and watch the end of the gods.
Then Kent State theater department put on "A Chorus Line," a splendid production, with superb dancing and mostly good singing. There is a tendency these days for young women to speak in Munckhin like tones. Not sure where this is coming from, but when a desperate dancer is trying to sound dramatic, as the cast of this musical is wont to do , the voices sound too much like Donald Duck's girl friend, all up in the throat ans all. I think the theater department should start a required course in voice, not singing, but speaking, so that they will sound like adults. I can't imagine how Lady Macbeth would sound in that un-dulcet timbre, but it may be the coming thing. Other than that, it was a really fine show.
Sally and I went to see "The Way," because I have loved Martin Sheen since he was my shadow president during the long, dread days of the Bush administration. "The Way" is a lovely film about the Camino de Santiago, a pilgrimage taken by people in Northern Spain. The scenery is breathtaking and the performances are fine and funny, too. You can even enjoy it whilst being a pagan such as I am. There are no explosions, not too much religion, no F-words or sex scenes, which are getting downright tiresome these days. There';s not much to have sex with in this movie anyway, except maybe with a few rocks. I enjoyed it very much and highly recommend it.
Then there was " J. Edgar." a very dark, literally, movie with a miscast Leonardo DiCaprio, a tall, skinny guy wrapped in a fat suit to play a short, stocky J. Edgar Hoover. It was interesting, and cleverly arranged to make him look like a hero, except at the end when you learned that he lied a  lot about his exploits. I did enjoy it, but wondered why the casting was what is was, considering that there are plenty of short guys who could have done it. like Matt Damon.
Last Saturday was another RD opera, this time "Satygraaha," about Gandhi in South Africa,which was by Phillipp Glass, who could put a hard-core insomniac into a coma-like snooze. However, it was very
interesting, especially the staging, which involved enormous puppets made of old newspaper (ya hadda be there) and a bright blue Krishna, who looked very much like Tiny Time, the late falsetto singer.  The libretto was in Sanskrit, based on theBaghava Gita,which I really must read some day in the distant future. It was worth seeing, and I did wake myself up with a very short kind of a snort, the beginning of a snore. I dont'; think anyone heard it, being sound asleep for the most part. But I an glad that I saw it. Richard Croft, who played Gandhi, had the most beautiful voice, even though he sang a lot of repetitive lines - a factor in the general drowsiness which resulted. It was a very rueful performance for all.
I just finished "The Paris Wife," which I enjoyed immensely. It was about Hemingway's first wife, Hadley (a fictionalized account),  and it was very fine and true and brave. And Heningway was a bit of a s--t. What else is new?
Posted by Guenveur in Kent at 10:22 PM