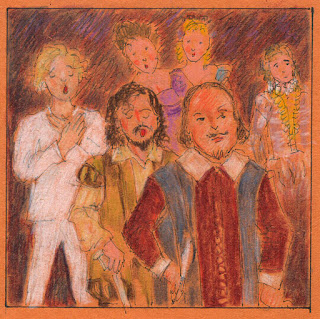 This past weekend was one of those in which all sorts of things are going on one after the other. I spent it gong from 12th century Sicily to 18th century Seville to 16th century London. Two operas and one movie later the only thing that's tired is my seat.
On Friday I went up to Cleveland with friends to see an opera put on by a small, but excellent opera company of a rarely performed work by a Polish composer who shall remain nameless. This opera company used to be headquartered here in town while the star was getting her PH.D.at the university. She is an amazingly wonderful bel canto soprano who is a joy to listen to. While they were here, they did a series of bel canto operas, by Donizetti, Bellini and others. They used the university as well as local churches in which to perform. I was really looking forward to hearing her again, even though the opera was one I'd never heard of. It begins in Sicily, travels to the mysterious East and ends up in ancient Greece. I think. It was sung in Polish, but there were projected subtitles, which I couldn't read, but never mind. It was written in the twenties and is the kind of formless music with lots of declamatory singing and no arias. The beautiful voice was mainly used in a kind o vocalise, hard to hear over the full orchestra and a chorus of loud male voices. They staged the opera in a large pseudo-Gothic church with terrible acoustics. Everything about the performance e was excellent, professionally done, great voices, etc., except that the music was just pretty bad, or not my cup of vodka. There was one character, called "The Shepherd," a young blond man, dressed all in white, with a lovely tenor voice, who minced around in a badly choreographed sort of dance, who was just unwatchable. He was supposed to represent Spirit, I think.I expressed to my companions, that I thought I knew why this work was so rarely performed, and they agreed. And both of them are musicians and know a lot more than I do about this sort of thing. We left before the third act. I hear that this opera is a classic in Poland. Okay.
The next day I went to see a real opera, one of those in HD form the Met. It was "Don Giovanni" and both of the male leads, Leporello and Don Giovanni were hunks with gorgeous voices. I noticed that Giovanni really got into his character, taking advantage of being a lech by vigorously feeling up the women he was seducing. They were supposed to be virtuous Spanish maiden, - well except for one, who was doing her best to get him to seduce her again and all. One of my favorite singers, Ramon Vargas, played Don Ottavio, and got to sing a couple of fine arias. He played one of the seducees boy friends, whom she didn't find too exciting compared with the hot seducer. The final scene, where the Comnmendatore sends Don Giovanni to hell was full of flames and smoke, but the women didn't get to see it, but heard about it later and were sad and all. No more feeling up time for them.
Monday, Sally and I went to see "Anonymous," which is all about how Shakespeare didn't write all those sonnets and plays because he was a right idjit. The actor who played him apparently viewed him as a Will Ferrell kind of guy, because that's how he portrayed him. We also learn that the Virgin Queen was not virginal, and dropped bastard babies all over the country, leaving them to be brought up by noble families, never learning of their royal heritage. All in all, this movie has its own story about that era, which makes for a fun movie. Great acting, costumes, sets, et cetera. When I took a Shakespeare course a few years ago, the professor, Kelly Gentoff, a Shakespeare scholar said at the beginning of the class: "Shakespeare wrote it all; nobody else wrote the sonnets and the plays." I wonder what Kelly would think of this movie. I think he wouldn't bother to see it in the first place.
On this Saturday, a friend and I are going to see the six hour "Siegfried." Renee Fleming interviewed the tenor Jay Hunter Morris, who is playing Siggy. It was hilarious. Morris is from Paris, Texas, has a great Heldentenor voice, but talks like the sausage guy Jimmy Dean. He claims to be right thrilled to be kissin' Debra Voigt. I reckonn we'll tote us some vittles for the two intermissions.
Posted by Guenveur in Kent at 8:40 PM