Red-faced at the Market 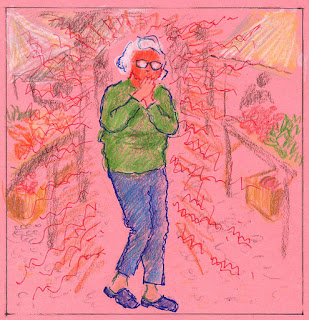 Last Saturday was the penultimate market days for our great Farmers' Market in Kent. Sally and I went down  to buy stuff and enjoy the ambiance. At this point, there is still a lot of produce available. I wanted some fresh lettuce from a particular stand which has the best, even this late in the season. That's the first place I started and I bought a lovely head of Boston lettuce. Then I went to the goat cheese stand just opposite the lettuce lady's place. I sampled a bit, which was delicious. Then I reached in my pocket for my wallet, only to discover that it was gone! I had just arrived, and hadn't moved more than 4 feet. I looked around, Sally looked around. I could not imagine that anyone there would have picked it up and walked away with it.  I wandered down to where that day's musicians were entertaining the crowd and asked it I could use the mike for an announcement. They kindly ceded the mike and I plaintively asked that if anyone found it, would they please turn it in to the director's table. Soon I had all these people helping me, asking at each vendor's stand if they had seen it. All I could think of was having to call the bank, the credit card company, Macy's (where I had planned to go after the market to take advantage of their one day extravaganza sale - 50% off on select items!!) and the 50 bucks  in the wallet with no way to get more because my debit card would be gone. We decided that we'd better go home and start calling. I had left my purse in the trunk, so Sally got it out and there was my wallet inside. I had totally forgotten that I had taken 20 bucks and put it in the pocket of the jacket I was wearing. I had forgotten that completely and instead of putting my wallet in my pocket I had just put the money in it. When I had reached into my pocket for the not there wallet, I hadn't dug down deep enough to feel the change from that twenty, so I didn't remember that at all. Sally went to the  market director's table to tell her, and to announce that it had been found, and I felt like a total  fool. All I could think of is that they would put it down to my being a fuzzy headed old person whose memory was slipping. I reason that it was one of those things that a person does without, and that I probably would have done the same thing when I was 44 instead of 84. So Saturday is the last day and I'm thinking I will just stay away.
And then I had been asked to write a letter to the editor in support of the library levy for the local library, which I hardly ever use because put up this new building which looks as if it was designed by someone who flunked out of the Architecture School of Stalinist Russia in 1947 (a bad year for architecture everywhere), the interior of which is also badly laid out. I wrote what I thought was a very nice letter, but when it appeared I realized that either their proofreader had goofed or I had (probably the latter) and instead of "100 years of library use" it read "100 tears". I admit that I am a terrible typist, really awful, and I am also not a very good proofreader either, as Emily and Sally are only too eager  to tell me.  But anyway, that's twice I have embarrassed myself publicly this week-end. One more time and I may have to change my  name and relocate.
But I did get to Macy's great sale and bought two jackets for the price of one; one for Sally and one for me.
Posted by Guenveur in Kent at 9:43 PM

Hey Missy, you're just as eager to point out my grammatical errors, as our last phone called proved. Mainly I just hate seeing mistyped words in your blog, because I know that you pride yourself on your correct spelling. There are a couple of minor errors in this current entry, but I won't plague you with them. Witty post, as always...

Only when you use "me" as the subject of a sentnce.