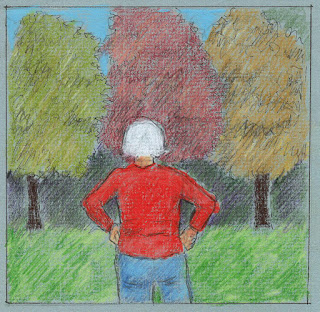 For some reason, this fall has not produced the usual brilliant,t colorful foliage which I look forward to every October. I noticed this on that geezer bus tour last week. We were about 45 miles south of here, and most of the trees were already bare. The ones which were not bare  had dull, faded colors. In my neighborhood, most of the trees are still green. The two maples in front of my house are usually a glowing golden color by now, filling my  living room with the warm tinge of buttery yellow. We have had a lot of rain, record amounts, in fact, which usually keeps the trees green longer, but the hues now  are the kind you get when there's been a drought. Even the brilliant red maple at the cider mill, the most photographed autumn tree in Portage County  is just a muted, washed out looking shade of plum instead of the flaming scarlet that makes people bring their cameras  when they come for cider. I have not had a chance to go through the golden tunnel of the maples out on Lake Rockwell road, so I don;t know if they  are suffering from the same problem as the other trees around here, whatever that may be. My friend in nearby Hudson tells me that the trees in her neighborhood are lovely and colorful, but then, everything in Hudson is lovely, being upscale and all. Even the trees know their role in the overall scheme of a perfect Western Reserve town.
Below is  a picture from the past of the golden tunnel. 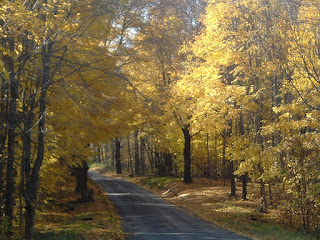 Posted by Guenveur in Kent at 6:29 PM