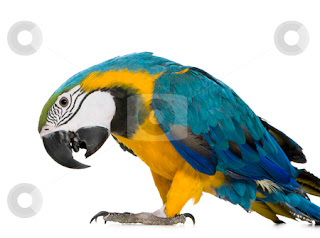 Had lunch yesterday with three women from my aerobics class. We met at a favorite Twin Lakes tavern, with lovely autumnal views of the lake, reflecting colorful tress on the other side. The specialty there is a wall-eye sandwich, which we all ordered. We started talking about times we'd been there before. Berry, who is a retired beautician and scuba dive,r recounted a true life tale of horror and hilarity. It seems that one of the women from the salon where she worked was getting married, and they decided to take her there for a pre-wedding party. They ate, they drank, and the bride-to-be especially drank and drank. This tavern had a pet yellow macaw. The tipsy bride decided that she wanted that macaw to sit on her shoulder. Now this lady also had on her cheek a large, dark mole. The macaw was brought to her table and set down on her shoulder. Mistaking the mole for a large, brown seed, it promptly began to snack. Screams ensued. Blood flowed. Most of the mole dangled from the curved. Don't know if the bird was smiling.
The bird was returned to its perch. The victim declined to go to the ER, since she did not want to appear there in her inebriated condition, perhaps before a waiting room possibly containing people who might know her.  Betty, who is always prepared, had with her 1.) scissors, 2.)NewSkin and 3.)Bandaids, requisite tools of the thoughtful hairdresser and scuba diver. (She told us that NewSkin is perfect for the odd accidental ear snip while cutting hair. I did not know that. I have never had my ear snipped while getting my hair cut. Who knew?) The wounded was taken to the ladies' room and Betty stanched the blood, and performed quick surgery, snipping off the remains of the loose mole, applying NewSkin (which is antiseptic) and the Bandaid. As the now mole-less bride-to-be was escorted out by her friends one of them remarked, "I guess you'll be canceling the dove release at the wedding now?"

Post Script: The next day the woman went to the doctor who did some further cleaning up, and it healed scarlessly in time for the wedding.
Posted by Guenveur in Kent at 5:29 PM