Death of an Idol


I heard the news today, oh boy. My idol, Maurice Sendak, has died. I have always loved children’s book illustrators and wanted to be one when I grew up. Since he and I were the same age, he wasn’t around doing books when I was a child, so I had to wait until I was a grownup to enjoy his work. Before “Where the Wild Things Are” he had illustrated some books I liked, written by other writers, like “A Hole Is To Dig.” It was when he started to write and illustrate his own work that he really came into his own. He never got over being a child, I think, which is why his books are so appealing to children and people like me.


When the Wild Things came out, as soon as I read about it, I bought a copy for Polly, because I knew she was the kind of child who would love that sort of thing. The reviewers thought it might be too intense for sensitive kids, and they were very wrong. It was only a few years after I got her the book (she was four at the time) that one of her favorite painters was Hieronymus Bosch, so wild things were even a bit tame for her. All of my kids loved that’ book, as have children for over fifty years. They loved “In the Night Kitchen” and “The Little Bear” books, too. He did beautiful black and white drawings for Randall Jarell’s “The Bat Poet” and a wonderful Grimm’s Fairy Tales”


I have collected all of his newer books, even though they began to be a tad weird after a while, like “Down in the Dumps With Jack and Guy.”
Many years ago I b ought, on sale, a wonderful book about Sendak which contains his biography and terrific illustrations form all of his books up to that time. It also has pictures of toys and an actual pop-up that he and his older brother created, as well as a miniature book he created which was a precursor to the wild Things.. He talks about his fear as a child in hearing about the Lindbergh kidnapping, which explains another haunting book “Outside Over There,” one of my favorites. I am using an illustration from “The Moon Jumpers,”an early book he was not satisfied with. However, I love the pictures in it, so there, Maurice dolling.


He was a terrific artist and his work will live forever. R.I.P., Maurice Sendak. 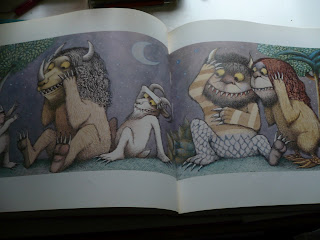 Posted by Guenveur in Kent at 1:45 PM