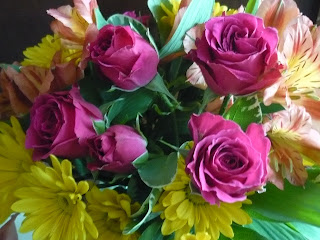 Wait! It’s June already. Where did May go, and why so quickly? It was a lovely month, mostly, as I recall. I spent a few days incarcerated in a hospital, having suffered from pancreatitis. Since it’s something common to alcoholics, I was shocked that I should fall victim to this without having had the fun of drinking. I found out that the meds I am on for high blood pressure and high cholesterol were the culprits, something they forget to tell you when they put you on those drugs. I recovered from it quickly but it took me another week to get over being in the hospital, where one is constantly at the mercy of people with needles. I am back to normal, although I am drugless, so my blood pressure and cholesterol are probably climbing as I write. Who care?


Emily was home for about two weeks, which was just great. She was here for the wedding of one of her friend’s daughter’s weddings which I also attended, since her friend’s parents are also friends of mine.  I had not seen the bride since she was a toddler and she turned out to be quite beautiful in a Vera Wang fairy tale wedding dress. The wedding was at a local art museum and was festive and fun. Thrown in was a tour of the galleries, from which I abstained. I don’t like mixing social events with checking out exhibits, so I’ll catch it later.


While Emily was here, we drove up to the northern part of the county on one of those days that make living in worthwhile – all green and blue with white clouds and waving grassy meadows. We went to one of the great orchards for strawberries just picked. Then we went to Rafael’s bakery in that fine old building, where he had Pink Floyd’s “The Wall” blasting on the sound system. His wife died this past spring and he had had her memorial service in the building. I missed it because of the pancreatic problem. He had met her in many years ago. He was a DJ in a club. He told me that when she walked in, he put a stack of records on the changer and followed her out and never went back. They had been married for forty years. She was a lovely woman, a professor at . She’d been ill for several years, and before she became too ill, they went back to for a farewell rip. It is a very romantic story and he is a very romantic Spaniard. He loves women and we are all his fans at the weekly market.


My gorgeous niece Amy came up to see us while Emily was here. She is the daughter of my late oldest brother and is very like him - only much better looking. We had a great visit and hope to see her more often. She is an assistant to a university president in southern and doesn’t have a lot of free time, so it was so good of her to come up and spend time with us. She’s a terrific person.


Emily left yesterday and the house is very empty as it always is after she’s been here. She and John and Sally all have ITouch devices and what silence there was was broken by the tap-tap-tapping of their little hand held computers. I think those things are addicting. Emily could do Facetime with her daughters and husband whewhen she was here, so I got to visit with them, too.


While I was under the weather I was gifted with many flowers, which explains the picture accompanying this post. It almost liked like a funeral parlor at times, but was much appreciated. 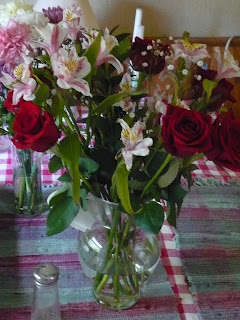 Posted by Guenveur in Kent at 6:05 PM

So sorry to hear you were sick and happy to hear that you are better.

I had a great time...strawberry fields forever. I note you mistyped 'daughters' as 'daughterless', which I was for a few weeks on vacation; perhaps that is what you are feeling now with me away. I shall return!