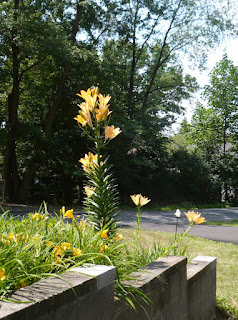 The rogue lily has been breeding underground and  new baby lilies have sprouted, so now I have all of these things springing up. So far I think they have intimidated the deer, so they have remained uneaten. They have intimidated my poor little cilantro and sage plants, which I shall move to the regular garden as soon as it is ready to have new things planted in it. I weeded it yesterday and it looks like something out of the Oklahoma Dust Bowl. We need rain.


Every year I am determined to thin out the less showy Stella d’oro lilies and have not done so. The poor things are so crowded they are not blooming as much as they should. I know they will be hard to dig up and will probably need a hack saw to separate, but it must be done.


If plants were protected like children, I would be hauled into court for neglect. 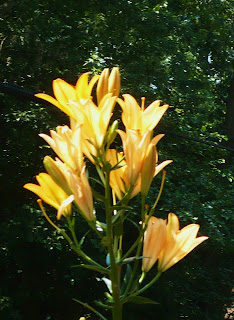 Posted by Guenveur in Kent at 1:40 PM