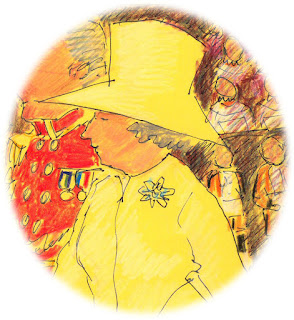 Since there’s nothing on TV these nights, I found myself watching a PBS special about a trip to the U.S. of A. by the queen back in 2007. Housekeepers in the posh inn where she would be staying were all in a flutter to show off how well they had prepared for the royal visit. The bed linens, they gushed, had been washed FOUR times – this before the regal body had mussed to sheets.  How many times AFTER she slept on them would they have to be washed? Does the queen think that previous guests had cooties? One maid proudly showed off the brand new TOILET seat, saying the she was sure Her Majesty would appreciate that. This caused in my mind a visual that I really didn’t choose to entertain. DO you think maybe a lackey rushed in with another new one each tine the queen flushed? Or did a lackey rush in to flush, too? A new roll of TP?


This whole think started me thinking about the life of a royal personage. I wondered, for instance, if the queen had ever made a sandwich, or even knew how. Manly years ago, in the old, original Kent Kapers, I wondered that sort of thing about our own American queen, Jackie Kennedy. After her death, I wrote about the things she had probably never done, and I shall now plagiarize myself and apply the same sort of probing questions about the British monarch. These are women with the sort of life one may think is full and rich, but actuality lacks much.


For example, has Liz ever eaten tuna noodle casserole? Much deserved derision surrounds British cuisine (except for roast beef, of course), but this tasty and easily prepared staple could add some savor to the and Toad in the Hole.


Has she ever fished a child’s toy out of the toilet? Used a coat hanger to pull matted hair out of a drain?  Cleaned up after one of the Corgis had an accident on the royal Persian rugs? Shopped at a Wal-Mart? Dressed herself? Gone outside without one of those HATS on? Actually changed a nappy? Washed out her underwear in the bathroom sink? Bought groceries? Taken out the garbage? Seen garbage? Mopped a floor? Made a bed? Used a plunger on a stopped up sink?


Let’s face it. The woman has had an incomplete, unrealistic life. Tiaras and ermine robes may be fun to wear, and being the richest woman in the world means you can have anything money can buy, including happiness (who believes not?) but, come on, you’re not really LIVING. You end up basically incompetent to survive in the modern world, I think.


But it would be nice to have a new toilet seat every time you sit down in a strange place.
Posted by Guenveur in Kent at 5:06 PM