I have really neglected this blog. I think it’s probably because I seem to spend a lot of time playing with the IPad. I have not been feeling too well for the past few weeks, and I distract myself with Netflix, watching “Frasier,” which makes me laugh, and old Masterpiece Theater favorites.

We had a beautiful spring, even though it’s been a bit chilly and rainy, neither of which bother me too much, although to hear some people complain, one would think their lives are ruined. There have been enough blue sky days to suit me.

I find myself disturbed by the way the world is going, especially the Syrian issue. I fear that our government seems only too eager to jump in and get us in another quagmire which will involve more young Americans being maimed and killed for…what?? The “news” that the Syrian leader is using chemical weapons calls to mind another WMD excuse to spread our military/industrial complex into action, costing the billions which could better be used for life enhancing purposes, rather than causing more death and destruction.

I did this picture last month, and the lilacs are long gone, but they did leave a lovely memory of this spring. 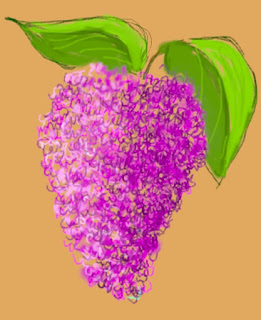 Posted by Guenveur in Kent at 2:41 PM

Yay! A new blog post at last! And a lovely drawing to boot! I do whine about the weather a lot, but you seem to have your priorities straight, as always!

OK, it's been more than two weeks since the last posting! YOU SHOULD NOT MAKE YOUR FANS WAIT THIS LONG!