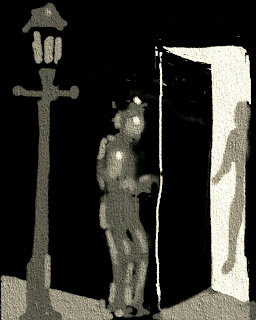 I'm not sure what exactly impels our family toward the bleaker side of entertainment, but this Christmas season is one example of the penchant for the dark side. One evening at dinner, the subject of film noir came up. I mentioned one favorite of that genre, "The Kiss of Death,"  which I saw back in the late 40s. It featured Richard Widmark as a psychopathic hood named Tommy Udo,  with a chilling giggle, which he displayed copiously as he  pushed an old woman in a wheelchair (played by Mildred Dunnock, who had played Willie Loman's saintly wife , for God'sake !)  down a very, very, steep staircase. As soon as my progeny heard about it, the title was looked up on YouTube, and after the dishes were stashed into the dishwasher, Sally's laptop was connected to the big TV and the movie was enjoyed by all. This was on Christmas Eve eve.
We made up for it the next night by watching that first of the Walton's saga, "The Homecoming." I fell asleep.
We have gone to two noir films this past week: " American Hustle," and "The Wolf of Wall Street," both quite enjoyable, and both about pretty rotten cheaters who use gutter language, very noir- ish, only in technicolor. Tomorrow we are going to see the new Coen brothers movie, which is about a folk singing loser and promises to be quite depressing.
Tonight we are joining the normal holiday revelers at the Boar's Head Feast at the beautiful Trinity Cathedral in Cleveland.
By the way, those of you old enough to remember Frank Gorshin, the brilliant impersonator, who also  played the Riddler on the TV Batman, one of his greatest impressions was of Widmark's character in "The Kiss of Death." He even looked like him.

Posted by Guenveur in Kent at 4:03 PM

Par your recommendation, we also watched (and thoroughly enjoyed) The Kiss of Death, and Chris commented that Richard Widmark's portrayal was just like the Riddler, so there ya go! However, we were both left wondering what on earth the point of the title was.