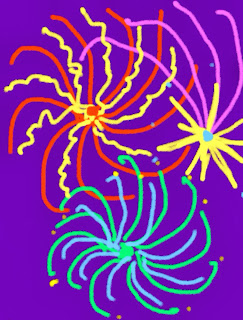 I'm not sure why, but I've never liked  New Year's Day. It could be the football games. It could be that the end of the holiday season  is nigh. It could be that there'll be at least 5 months (at least in Northeastern Ohio) of gray skies, dun- colored grounds and skeletal trees. It's just a dull and uncertain time, uncertain because of capricious weather. Planning ahead for anything that involves travel, for instance, can be tricky because of heavy snow and icy roads. Even though I no longer drive, I don't even like to be in a car when it's snowing.
New Year's Eve used to be enjoyable time when I was younger. Lots of parties, lots of putting on my prettiest clothes, high heeled shoes and glitter. Most of my closest friends are gone off to green pastures, and those of us left are too old to drink in the New Year. And the thought of high heels, just the thought of high heels, makes my feet hurt. How did I ever wear those things, to say nothing of dancing in them. Oy!
I went to get my hair cut this morning. The place I go is one of those chain salons which doesn't take appointments. I expected it to be packed, but I got right in with my favorite stylist. I asked her where the crowds were, assuming all the ladies would be in, getting all glossed up for the big night. She told me that people just don't do that any more, and haven't for some time, preferring to have informal gatherings. Poor things.
But New Year's Day is so un-joyous to me. When I was working, or in school, it  meant going back the next day, but  that's no longer the case. It's a good time to see a movie, at least. And in the Catholic church it's called The Feast of the Circumcision. That's something the nuns never explained.
The Boar's Head Festival was terrific, as usual. We had to sit in the west  transept for a change and found it even better than the usual place we have sat for years. The shepherds entered right in front of us with two small goats, one of which sang aling with them all around the cathedral and right up to the manger. We also went to a different Vietnamese restaurant, this time on the near West side of Cleveland.
Dessert was ice cream at Sweet Moses, a trendy creamery in an emerging neighborhood in that part of town. Wonder if it's open on New Year's Day?
Posted by Guenveur in Kent at 6:19 PM