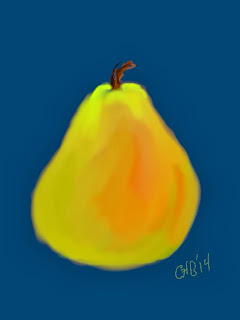 A million years ago, someone sent my father a Christmas gift of a box of Royal Rriviera pears from Harry and David. Actually, it was almost 65  years ago. We fell upon them like ants at a picnic. My father always got great goodies from companies involved with his work as an engineer. ( One  year someone sent a case of champagne. We broke open the first bottle right after Christmas morning Mass. We three older ones were home from college, semi- adults and allowed to drink wine at home. Sometime in the afternoon, the two little brothers informed us that many people had stopped by to offer holiday greetings, but all the grown-ups were sprawled about the living room, gently snoring,  fast asleep. My mother, being always the lady, had gone upstairs to collapse on her bed.)
The pears, however had no such soporific effect. I had never tasted anything so delicious. They were carefully shared and savored. It was many years before I had them again, until a Harry and David catalogue arrived in my mail box, but I hadn't ordered any for myself for a long time. Dear Nancy the quilter sent me a box when I had hip surgery a few years ago.
A dear and kind friend has been driving me to exercise class and other places since I had to quit driving. I started sending her the pears for Christmas several years ago as a thank you gift. This year I added a box for us. They arrived very quickly, and two days later, another, bigger box arrived- a gift from my brother Michael and his wife Marian.
So we are up to here with these beauties. We've eaten them for dessert. We've eaten them for breakfast. Polly has nade green salads with blue cheese and bacon and pears. They are just as good as those first ones I had almost 65 years ago. They are also beautiful to behold, with rosy cheeks.
And there's no such thing as too many Royal Riviera pears from Harry and David, bless their Oregon hearts.
Posted by Guenveur in Kent at 8:25 PM