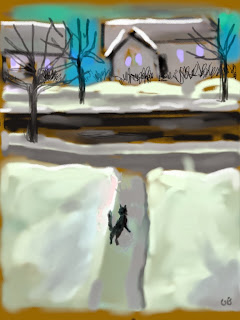 Last winter Sixto was still in his kitten hood. He explored the snow tentatively, lifting his little feet and trying to shake the snow off. He did not spend much time outside. This year, things are quite different. He sits on the back of the couch in front of the window, watching the snowfall. When the ground is covered, he goes to the door, demanding to go out. When the door is open, he doesn't hesitate, in that annoying way other cats we've  owned have done, while the door opener freezes, waiting for the animal to pass through to the outside. Sixto walks right out, pausing  on the stoop to decide which direction he'll take.
Sometimes when he's looking out the window, he'll spot a bird, and watch which way it flies, and when he gets outside, that's the way he'll go, too, with great expectations. He's not much of a birder, thank goodness. One of the few burdens of having a cat is that  one has to reconcile their jungle beast nature with one's love of other creatures, great and small.
There are those cat owners who keep their cats inside, but I consider this a form of animal abuse. When the late, great Adlai  Stevenson was governor of Illinois, there was a move to leash cats. Stevenson was a marvelous, literate speaker and wordsmith. He gave a witty speech about the nature of cats, describing their need for freedom. I wish I could remember his exact words, but the movement to restrain cats was defeated. I wrote him a letter to which he responded, which I saved for years and, alas, lost in a move.
But I digress. Sixto loves snow, that's the point. He spends as much time as possible wading through it, although he has not yet developed the little snow balls on his belly that Dupree used to come in with. That will have to wait for deeper snow.
Posted by Guenveur in Kent at 2:02 PM

I'm glad to see that someone else remembers Mr. Stevenson fondly. Google "Adlai Stevenson cat speech" and you can read it again.
Sarah in California