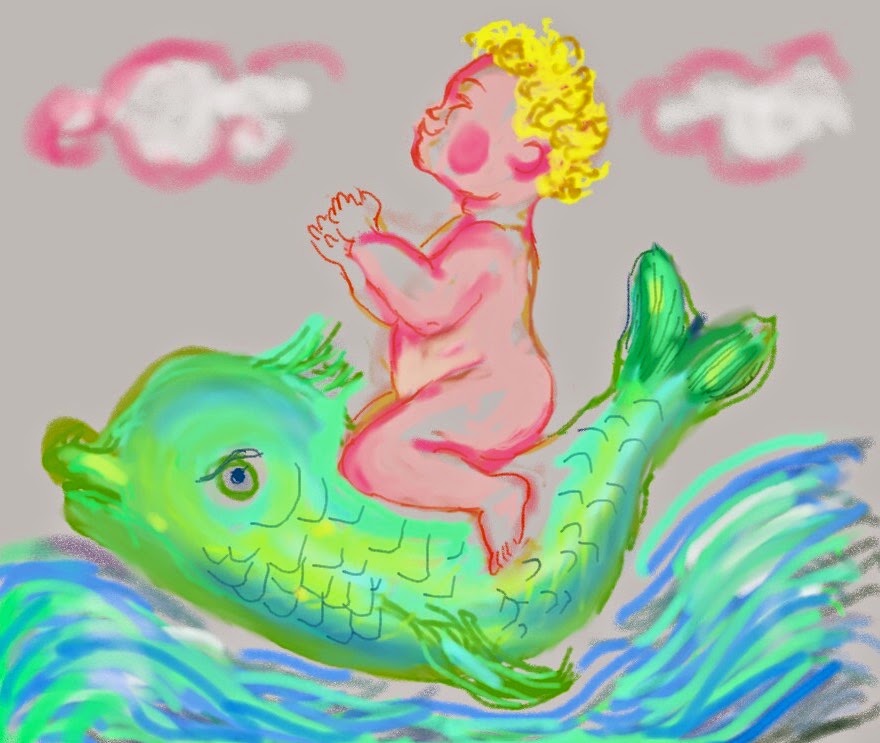 I am continuing the online drawing class I took in March. It's rather addicting. Several of the same people have signed up again. I'm not producing any "art," but I'm having fun drawing a variety of things in a giant sketchboo. figure I may have to keep doing this class untilI fill it up. We're supposed to draw every day, and each week we have a special assignment based on a topic that Susan gives us. This week it is Something Fishy. So far people are doing some pretty colorful, jewel-like drawings. The illustration here is a practice drawing I did in my IPastel computer program, which I can't use for the class. For the class assignment I paired up the boy on the dolphin with a mermaid. I like this one here better, because with this version I can get the iridescence of the fish scales, which I couldn't seem to accomplish on paper. But one of the good things about the class is that I am actually doing some drawing on paper,  leaving the IPad,  enjoying it.
Spring is actually here at last, and this week-end there are leaves popping out on the trees. To add to the seasonal turning, in the past week I've had two Apollo's Fire concerts. A week ago I won four tickets to an afternoon mini-concert for families, examining Vivaldi's Spring, showing the audience how the composer brought in the sounds of the season and demonstrating the instruments and the players' roles in the piece. It was informal and witty. I took Cynthia and Sally and we had a fine time. Went to Corky and Lenny's deli after for brisket.
Then this past Thursday Ann Waters and I went over to Akron to hear them do all four seasons with the full orchestra. After last week's performance, Cynyhia had made me a little painting of Jeannette Sorrell, the orchestra's founder and director, tuning her harpsichord, wearing a beautiful dark blue dress, with the sun shining through a chapel window, lighting up her brilliant red hair. I decided to make a copy of it to give to Ms. Sorrell after this week's concert ( Ann knows her well). Well, the concert was astounding, a full house, stomping, clapping, cheering and uplifted. Ann and I caught Jeanette as she came out and I gave her the picture. The cellist was with her, and they both loved it and she was very pleased to have it. She is probably still wondering who that strange old lady was, and maybe thinks I did the painting. Actually, I did a version of it for my drawing class. We had gotten to the performance last week early. It was in a chapel at one of Cleveland's great churches, and the scene was lovely. Thursday night's was in a huge class Lutheran church in Akron, with great acoustics.
I have missing my Cleveland Orchestra concerts, so it was great to hear an excellent professional group playing full out in a great space.
There is so much good music around here.
Posted by Guenveur in Kent at 8:03 PM