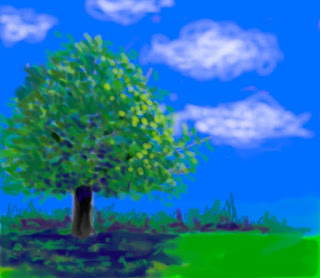 The title does not refer to my alma mater's colors, the ones worn by the sports teams and the logo of Kent State University.  It refers to the kind of glorious weather that September is having. We'll probably pay for it in January, but one must live in the present and just enjoy these beautiful days on sunshine and blue skies.
We do need rain. We went up to Gordon Square a couple of weeks ago to see "Nashville," Robert Altman's grim tribute to the Bicentennial of the U.S of A., a cheery, music filled film that ends in bloodshed, featuring cameos by Jeff Goldblum, Julie Chistie and a few others who apparently wandered onto the set. Fine movie, viewed in a great Art Deco theater on the near west side of Cleveland which is being restored. We met DCB, our NPR  friend who knows Cleveland well.
Thanks to him, we ended up at a very fine restaurant housed in a former bank. It was packed with the Bright young Things who are inhabiting the city and making things happen.  I had a braised  Romaine salad. Interesting. Anyway, I bring this up because it rained buckets, cascades, drenches. The drive back to Kent was downright scary, even though I was not the one who was driving. The heavy rain was welcomed by all of us with tan lawns.
Unfortunately, this week I have not been enjoying this lovely weather. A year ago, my dentist recommended having a molar removed, since it had a deep decay spot on one root. At the time I just was not in the mood to go through that sort of thing, especially since I would need a permanent bridge, which costs more than my 1968 VW square back cost brand new. So I put it off. Nothing hurt, so wothehell, as Archie the cockroach used to say.so I had to go back to my dentist a month or so ago on account of having taken advantage of the Monday five bucks admissions and free popcorn deal at our local theater. Old gums, even when a person flosses and brushes diligently cannot always avoid being  infiltrated by the odd hull. So I was again told to take care of that bad tooth. So I did, on
Monday last.
I would rather have gone to the five buck Monday flick, sans popcorn. However, the tooth needed to be removed. It was quite an ordeal. The endodontist is very good, highly qualified and all. It took over an hour and both he and I were exhausted by the time he dug it out. It didn't help that he kept saying it would have been a LOT  easier if I had come in last year.  I finally I said, "I am an old person and I just didn't want to do this." That seemed to work and he didn't say I should have come in last year again.
I'd rather have hip replacement surgery again than go through dental surgery. I wasn't "a little
uncomfortable." I was and still am in pain, but healing. I have been living on yogurt, applesauce and cottage cheese. No hot coffee either. I'll live. However, whenever I have to spend thousands on dentistry, I always think of the waste of money if I should be hit by a truck soon afterwards.
And I am enjoying the beautiful late September days, at least looking at it through the window, while cuddling an ice pack against my face.
Posted by Guenveur in Kent at 9:06 PM