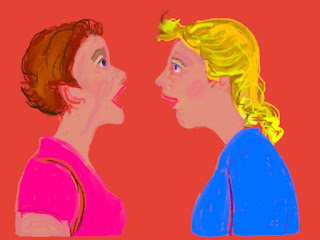 Sometimes it is not easy to maintain a non-judgmental attitude. Sometimes one must keep the jaw from dropping after hearing utter nonsense from an adult a human being. No civilized response is available. Back in olden days one could snort or fiercely  flutter one's fan, or otherwise indicate displeasure. Alas, those days have passed. There is much uncivil behavior now, of course, masses of it, but I am trying to avoid that sort of thing. It is hard. One must stifle oneself.
The first dumb comment came from a very nice woman in my exercise class. This came in the dressing room. I was in one of the booths, trying to peel my wet suit off.  She was discussing her prayer group from her church. They meet once week and pray like bastards for all sorts of worthy causes and people and all. Sometimes they invite others to attend, individuals or social groups. Then she said, "We invited  the Girl Scout troop, but then we thought about that new law, and had to uninvited them." The new law? Not exactly a law, but the recent Supreme Court decision concerning gay marriage. And perhaps the fact that the  scouting organizations now accept gay leaders and scouts. No one said anything to her. This nice woman is the type who wishes everyone a blessed day. Last year she asked if we minded if she  would say prayer for someone's sick relative. Well, who's going to refuse? Almost everyone bowed her head. So she did that thing that evangelicals on TV do so well, an ad lib ramble that went on quite a while. That was one thing. But refusing to have a bunch of little girls at her prayer meeting was, I am sure, not pleasing to God, if one exists.
Then a couple of weeks ago, when I went to get my hair cut, I had to wait. When I sat down a woman  couple of seats over smiled and said, " Oh, I'm so glad you're here, so I'll have someone to talk with while I wait." That was fine with me. Then she pointed to her book on the seat between us. "You've got to read this book!" I looked down and it was a book by Dr. Ben Carson, the favorite of the Tea Party intelligentsia. I smiled and said that he was not my kind of candidate, very politely. She told me what a brilliant man he was and that his wife had played violin in a symphony orchestra and also had
a beautiful singing voice. Well, we went on to chat. She had worked at the university and was pleased that her children had their education there tuition free. They had all done well and had good jobs. Her oldest son had had his own printing business. That is, she stated further, until Obama ruined it and caused him to lose it. "oh," I said, "How did that happen?" "well," she replied, " you know, all that new technology, so people could do their own printing."
Now in either of these situations I could have just said, "What the HELL are you talking  about."
But I didn't. To the salon lady, I did say that I wasn't sure that president Obama had  anything to do with computer technology, but decided that whatever convoluted reasoning had led her to that belief
would not yield to rationality.
And them I was told by another person that when that time comes, that time when only true believers will be swept up into heaven, exactly 144,000 Jews will get to join them, and that information is in the bible. I was given chapter and verse, but I just don't want to look it up. We Catholics  were
discouraged from reading the bible, lest we fall victim to misinterpretation. For once, the Church was
right. 144',000?  Isn't that, like, 12 gross or something? And who's counting them?
As for the Girl Scout disinviter, I still like her, but not so much anymore. I am, of course, judgmental as all get-out, but I do stifle.
And if anyone reading this is offended, you're on the wrong page here.

Posted by Guenveur in Kent at 7:27 PM