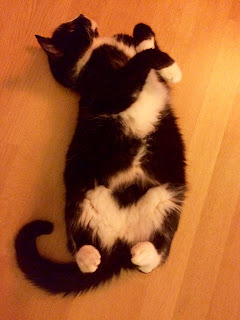 I have to show off another great-grand cat, which I have never met in person. She is the first cat in the Petrou family since the tragic demise of the late, great Mookie. He lived to be quite old, so the girls had never had a kitten when they were small, since Mookie came before them. He was a beautiful Maine Coon cat, about the size of  a VW Beetle, almost.
So, basically, Izzy was greeted with the joy only an adorable kitten can engender. I have pictures of her cute kitten antics, one of which was a kind of skittering crab walk, where she hopped sideways on all fours. It was a much admired talent. She was probably smothered by the Mookie-bereft family, which had been catless for several years. I remember visiting when he was old and the girls were young, and their asking if they could get a gerbil when he died. They weren't being heartless; they just wanted something little, I think. Anyway, Izzy filled the need very well.
Since the arrival of Francine, I hear that she has become a bit distant, obviously feeling betrayed by he former adoring humans, and spends a lot of time outside. She does not like Francine the usurper. I find this unusual. Sixto has adopted a cute fluffy gray neighbor cat, with which he frolics out in the yard. And Dupree and Herman, the constant tiger interloper slept side by side on the back of our couch, which was Dupree's spot, like Sheldon's. Maybe it's because Izzy and Francine aren't into sharing space or humans. As I mentioned before, girl cats are different.

Posted by Guenveur in Kent at 7:49 PM