I have written about a couple of cats, so now I must write about Polly's magnificent pooch, Petey. He is part standard poodle and part Southern hound, which is not a breed, but seems to describe one of his  parents. I only know Petey through pictures, videos, and the words of Polly. She did not mean to get a large dog, but the shelter told her that he was just the dog for her. He was about six months old when she got him, and was a big puppy. I think he looks quite beautiful. All of her friends love him, too  take care of him when she comes to Ohio to visit our cat dominated home.
His godfather is one of Polly's friends, who I think would like to steal Petey. His name is Paul Lisicky, and he was just awarded a Guggenheim Fellowship literary award. His latest book, a memoir  titled "The Narrow Door" has received glowing reviews from all the top lit critics everywhere. (He is one of the dog sitters, and has taken some very cool photos, including the one below, which shows off Petey's greyhound-like legs. This relationship makes Petey an obscure connection to fame, of course.)
When a portrait of Petey was posted on Facebook, my favorite comment was that he had a sincere face.
Yes. 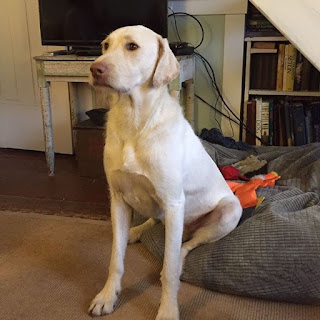 Posted by Guenveur in Kent at 8:07 PM