Lead in the Head 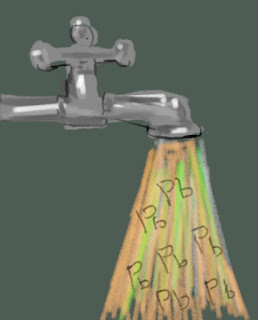 I think there is now much evidence that the terrible situation in Flint, Muchigan is not confined to that beleaguered locale.  Increasingly, there is evidence of severe brain damage on a national scale. How else to explain the clear madness affecting voters in so many states during this primary season?
There can be no doubt that the lead contamination has affected the water supply across the country. In state after state, voters have gone to the polls and chosen as a nominee for president a person with the mentality and behavior of a thirteen year old boy.
Apparently the poison in the water has caused these people to imagine that this whole system of choosing a president is like that old "Let's Make a Deal," TV show where people put on ridiculous costumes and props to get on the show. Ever since men like Nixon and George W. Bush were elected to second terms, I have not had much trust in the American voter, but this time it seems downright hopeless. I know that there are those who switched parties during the primaries, either to give the Demicratic nominee a clear chance to win the general election, or to thwart the Big Orange Face's victory, but I think that strategy may backfire, and one hates to see the gloating and bragging that happens with every primary victory he bags.
So check your water supply. Buy the bottled stuff. Clear your brain.
Or just don't drink the water.
Posted by Guenveur in Kent at 4:27 PM