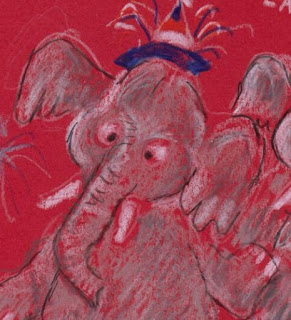 I did this drawing for a post I wrote in 2012, when it was obvious that the GOP was losing its collective mind. The party seemed in thrall to the wackier elements of the Tea Party, focusing on Obama's birthplace, fans of Fox News, denying evolution and climate change,  disparaging Europe, favoring fundamentalist religiosity and other extreme right wingism issues, all with an undercurrent of anger at the way things were in the country ( which some of us interpreted as fury over the fact that the president does not look like them.) Mitt Romney, who had been a moderate Republican governor of Massachusetts, bought into this wackiness and lost  the presidential election.
Now the Republican primary  voters, angry white men mostly, have reclaimed much of that 2012 dogma, opting to support a demagogue who is about as prepared to lead the country as any of them are. The GOP has been breeding these folks, adding fear to the mix, and now they're up the proverbial creek. This should make me happy, but it's a very sad situation. We've gotten so far away from any kind of intelligent discourse in this country, or, apparently have a serious lack of informed voters, that despair seems the only possible response.
The GOP convention is about thirty miles up the road from where I live. I guess the bars during the week will be full of morose Republicans hoping for some dues ex  machina to rescue them. Maybe the Cuyahoga River will catch fire again and distract the delegates or catch the billionare's hair on fire as happened to Mayor Perk  many years ago. Without that hair  he's even less than nothing.
Posted by Guenveur in Kent at 2:27 PM