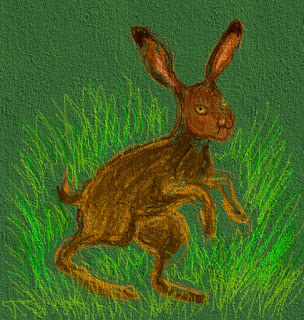 A couple of weeks ago on BBC Radio4 the book f the week was "The Running Hare," by John Lewis Stempel, an English farmer and author. Like most British writers about nature, his use of language and imagery takes you right there. This book is about his wish to develop a field where hares would settle. He leased a little over two acres of land a few miles from his own farm. His plan was to sow a wheat field interspersed with a wide variety of native species of wildflowers of many colors. (Along the way he tells us how the cornflower got its name. It seems that centuries ago the seeds got mixed in with corn seeds and bloomed along with the growing corn.)
He starts his field in the very early spring, and  describes  the process of the plowing and sowing and waiting for the hares to show up, the first being a female, which he calls a Jill. Before long, there are several pairs, and then the leverettes, the babies. He takes the reader through the seasons of the year, with the colors, the feel of the sun and the air and the scents, it is just a very fine and lovely experience to share.When asked how one becomes proficient as a nature writer. his advice is to go outside and sit in it.
Hares are related to rabbits, but have much longer and larger ears and very strong hindquarters. The first time I saw hares close up was a rather macabre experience. I was in the large central market in Florence. It was around Christmas  time and the place was a sensory feast. Strolling along enjoying the sights and sounds, I found myself suddenly confronting a counter lined with giant hares, skinned except for their furry heads. Their dead eyes were the size and color of purple plums. I could not unsee this sight. European butcher shops do not put things in little plastic packages. They know what they are eating, Inguess.
I have had rabbit before. When I was a senior in college a couple of my friends had gotten married and invited me for dinner frequently. One was of German descent. Her father would trap rabbits in his yard in Cleveland Heights and my friend Nancy would make hasenpfeffer, crumbling ginger snaps into the gravy. When she got the rabbits,  her father had already cut them up like chicken, so I never had to see a rabbit looking like the Italian hares in the Italian market with their furry little heads on.
My other married friend was from Vienna, and I learned never to ask her what the meat was. She had told me that where she was from they used every part of the animal possible. We never had rabbit there, though.
The next time I saw hares was from a distance, and was a much more pleasant experience. Emily and I were returning on the train to Erding after a day in Munich. It was late afternoon and I noticed what looked like a couple of dogs running through a field. Then I realized they were leaping, and had very long ears sticking up, and they were hares, alive and well  and enjoying a frolic. I was amazed at the size of them.
They may have eventually ended up in ginger snap infused gravy, but for that late afternoon life was good. The hares running in Stempel's two acre flower filled wheat field no doubt looked the same.

Posted by Guenveur in Kent at 7:34 PM

I STILL look for hares in the fields when I'm on the train but they are a rare sight indeed. You're lucky we saw one that day!