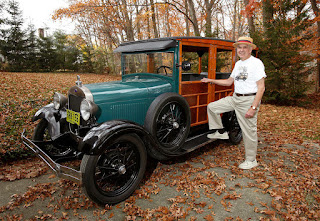 See that car? I have a long story about it, so get a cup of coffee. Or a shot of bourbon and settle down.
Several months ago, the Akron Beacon Journal published an article about an area man and his first car, a 1929 Model A Ford woodie. The man's name is Kirk. When he was in his teens he worked on a farm up near Lake Erie, where his parents had a summer home. He and  another teenage  boy discovered in a shed on the farm a decrepit  station wagon, with no tires, with the middle and back seats removed so it could be used to haul hay. They were intrigued, and asked the farmer if they could have it. Neither boy had a driver's license yet, but like most boys that age, they knew how to drive. The farmer let them have it, figuring they probably couldn't get it running anyway.
They scrounged around the area junk shops, finding parts they needed and soon had it running, loving every minute. They named her Genevieve. They bounced around in the fields on the tire deprived
rims most  of the summer. Somehow they managed later to find tires for it.
The older boy, Kirk, graduated from high school and enlisted in the Navy. It was 1945, and the second world war was still on. The younger boy took the car back to his hometown fifty miles south of the farm. He painted it gray.
When Kirk got out of the navy, after the war, he looked up his friend and bought the car back.  He was on his way to Cornell University, and painted it red and white, the school colors. He used it all the way through college, and finally sold it after he married. He lost  track of both the car and his fellow farm worker.
A few years ago, he tracked down Genevieve, I believe through the Ford Model A Club, and has restored her in all her glory, as shown in the above  photo.
This story was what I read in the paper. Since it was about boys who were now my own age, I  related to it, and loved their ingenuity and those days of the past, when my older brother Bill and his friends
I'm had fixed up an old Midel T Ford when they were in high school. Cars and boys!
Two days after the story was in the paper, my friend Cynthia Lynn, who helps me by driving me here and there, picked me up from a doctor's appointment. She started telling me about a conversation she had recently had with her mother. She had asked her about when she had started dating her father. Her mother said that she was fourteen and he used to come by her house in his old woodie Genevieve.
"What?"
"Yeah he had this old woodie and he''d take her out for ice cream and.."
"Wait a minute, a woodie named Genevieve?" I told her about the article. Neither she nor her family get the Akron paper, so I knew she  had no idea about the article. I knew her family had for generations summered up by Lake Erie. Also the article had said that the younger by had taken
The car to Warren, where her father had grown up.
When we got to my house I rushed in to show her the article, but, alas, it had already gone to the
recycling truck the day before. I did show her the online article, and she was sure it was the same
Genevieve her father had talked about, as well as the farm work he had done during his teen years. At this point, her parents were at their winter home in Florida. I told her to give me her father''s phone number, and that I would  e-mail the reporter who had written the article to  give it to Kirk.
Cynthia's father is one of those active, athletic men who love to hunt, fish, play tennis and perform other manly tasks. However, of late he has suffered a number of debilitating health problems which have caused depression and discouragement about having to limit himself. Cynthia called me a couple of days after the revelation  about Genevieve to tell me that Kirk had called her father, that Kirk told him he'd been trying to find him for over 70 years, and that as soon as Bob and his wife were back in Ohio, they were going to get together and take a ride in Genevieve.The effect on Bob Lynn has been a complete turnaround and given him a new lease on life.They have talked a number of times since that first phone call, and Kirk has invited Cynthia and her sister Judy to dinner and kept in touch.
I contacted the reporter again to give her an update on this remarkable result of her original story, which she did, being very much pleased at such a positive outcome for these two octogenarian men.
Last night I was invited to dinner with Cynthia by Kirk and his wife Do't at the posh retirement community where they live in Hudson. In front of their house sat Genevieve, gleaming in the late afternoon sun. We drove in it to the dining hall in style.
i felt a little guilty riding in it before the Lynns get to.
The horn goes "Ah-yooogah

What a fabulous story!!! Made my evening!