Happy Fourth and Then Some 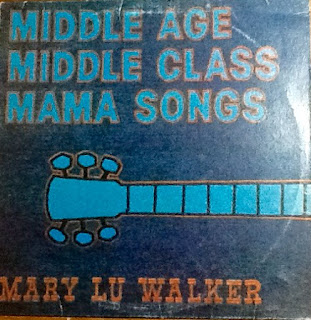 In my family the Fourth of July was not just the day to celebrate the Declaration of Independence and the beginning of  the United States of America. It was also the birthday of my sister, Mary Lucille, or Merry Old Seal as one of our great nieces called her.  For the last seventy some years she has been known as Mary Lu, the shortened version which her siblings don't use.
This year, she will celebrate her 90 th birthday, an age she neither looks nor sounds like. She has always been quite a beautiful woman and still is. She will deny this but the description fits.
After giving birth to eight children all now extraordinary adults, she learned to play the guitar at about the same time as churches began to use the folk music genre. She  decided that there were no suitable songs of that type for children.  She had always been musical, but without any formal training, but she started writing songs about the kinds of things that were important for children to learn about, things like friendship, kindness, peace, sharing, all those positive  aspects of human behavior that enhance life. They were not preachy, the tunes were simple and easy to learn, and could fit into church or school or home. Word spread about this music and soon she was maKing recordings, traveling around to conferences and presenting workshops on how to use song with children.
One of her most popular recordings grew from her life as the mother of a large family. It's called "Middle Age, Middle Class Mama Songs." I've always thought of it as an Erma Bombeck song book. It's funny, moving, and very true. She wrote further humorous songs, and songs about nature, the environment, and frustrations of the computer age. She's written songs about peanut butter, fire flies and dandelions. She's written songs for all of her grandchildren, specific to each one. She has brought a lot of joy and laughter with her music.
So this weekend, her children and their children are gathering in Corning to celebrate a life well lived and  their remarkable mother. And it's great to have her as a sister whom I dearly love.
Posted by Guenveur in Kent at 10:05 PM