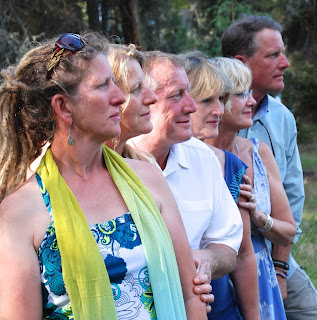 These folks are a lilies over one-third of the Harper tribe. They are the children of my late brother Bill and his wife Eileen. They range in age from 52 to 65. Two of them live in Ohio, three of them live in Montana, and one of them lives in Alaska and Montana. Between the six of them they have fifteen children, most of whom I have met at least once. Three of them have grandchildren, none  of whom I have met.
One is a former writer and editor who recently retired as the assistant to the president of a state university. One is a nurse-practioner specializing in oncology. One is a surgeon still in private practice. One is an accountant for an insurance company, while also rearing three grandchildren. One is a TV producer whose hobby is climbing very tall trees. One started out as a theater arts professional who worked with Stephen Sondheim on the  original production of "Into the Woods" on Broadway, taught scenic design at a small college for a while, and, deciding to get a real job, went back to school and is now a nurse.
I do not see them often in person. I keep up with those who are on Facebook, enjoying photos of their families. They have all the best qualities of their parents, good looks, intelligence, generosity of spirit, and wit. They also are very close to each other, friends for life, which is the way families should be, but often are not. I am very glad to be one of their aunts.