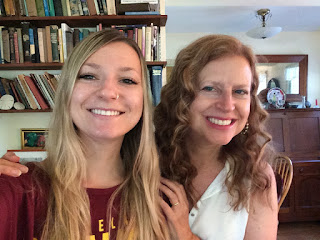 We just enjoyed a little over two weeks of having daughter Emily and granddaughter Elena (Ellie)  visiting from Germany. I had not seen Ellie for five years, and she is now an adult. Of course I've kept up with her on  FaceTime/book, but that's not the same as having her here in person. She's both lovely in appearance and bright, kind and thoughtful in personality. She is a certified Montessori teaching assistant in Munich, and hopes to get a degree in early childhood education. I think she knows more about children than I ever di even while bringing you all up. She wants to come to Kent State, and they spent some time there investigating options.
When Emily is home, so are half the people in Ohio. Well, not exactly, but it seems that way. David C. Barnett, who is Ellie's godfather and my son from another mother, was here several times, and Rich Warren, another son from another mother was here once, and they visited hum in Columbus, while also visiting a passel of Harper cousins.
There was also a day in Cleveland with a group of folks known as the Kaffe Klutsch, some former WCPN personnel, which puts together every year a Christmas CD. This CD has in the past included the Burnell Family Singers, the Petrou sisters, and presently, cousin Wille Walker, and the Corsini Brothers Trio. It is a not ready for  prime time effort, enjoyed mostly by its participants.
The weather was disgustingly dog breath, so not much cooking occurred. One of the first things Emily wanted to do was to go to Ray's Place, our favorite pub, with good eats. Emily and Ellie are vegetarians, who eat healthily back home, but had no problem downing Ray's great French fries and onion rings with their garden burgers. There were a couple of breakfasts out as well.
Since this is the corn on the cob season, we did brave the hot kitchen here at home to indulge in Ohio's finest golden treasure, along with Ohio ripe tomatoes.
We did end up once in a while with people sitting and staring at devices, clicking away texting. I don't text,  but I do get caught up in the FB vortex.
They left Thursday morning and we hated to see them go. As it does when you are with people you love, the time zipped by. The house is empty. However, as I write this post, Emily and I are having a conversation via messaging, something rather miraculous to one for whom long distance phone calls were so rare when I was a child with faraway grandparents whom I never really got to know. And they even lived in the same country as I did. 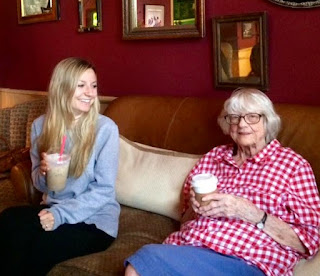 Posted by Guenveur in Kent at 6:56 PM