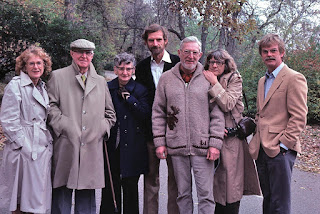 This  is my original tribe, the parents and siblings. The parents,  May and Sid , lived into their ninety first years and died two years apart. She had been one of the first female draftsmen during World War I, being hired right out of high school. There she met Sid, an intern engineer, right out of college. He was from Alabama, and she from Masachusetts, where they met. They were married over 65 years.
There were five siblings,  born from 1923 to 1936. Three of them, the boys, were born in Atlanta, Georgia and two of them, the girls, were born in New Jersey. The girls are older than two of the boys. There was a bit of moving between these births. They all ended up in Ohio in 1940 and hated it for quite a while. The younger boys considered it their home first. Only one of the girls now lives in Ohio. The other girl lives in Nrw York state.  One of the boys lives in Oklahoma. Two of the boys have passed a way and are sorely missed. One had lived in Montana, the other in Ohio. Both of these boys were doctors, one a cardiologist, the other an orthopedic surgeon. The boy in Oklahoma is a =retired public relations/advertising professional. One of the girls is a singer/songwriter who has taken her music to many countries around the world and can be heard often on WCL Weekend  Radio syndicated  program. One if the girls is a retired prevention specialist for a mental health agency and an illustrator.
The five siblings have, between them,  produced twenty-six children. All of them have become grandparents, and two were great -grandparents, and one is about to become a great-grandparent soon.
The surviving siblings keep in touch through the Internet and telephone. Travel is not so easy as it once was, and FaceTime is a poor substitute. We've been scattered for many years, but always are able to connect through our shared past.
Posted by Guenveur in Kent at 6:28 PM