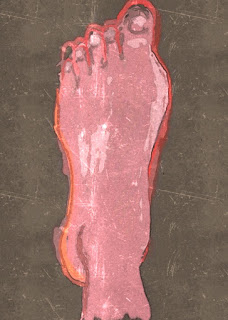 I broke my damn left foot. I broke it while falling in a graceful sort of spiral, my foot being the pivot point. I fell for no reason, other than geezerhood. My friend Carol had just pulled up in front of my house to take me to a poetry reading. Once John had hauled me to my feet, I limped out to her car, using my cane to counter the pain in my foot.
Once at The Last Exit Book Store, the site of the monthly gathering of local poets, I found a place with an extra chair on which to place my leg, thus elevating the foot. At this point I figured that I had merely twist d it. It didn't hurt. I had taken my poem about Dupree, which had won the grand prize
(of dog gear) in the WCLV Pet Poetry contest  several years ago, figuring that a prize winning piece would save me from the possible scorn of the other poets present, mostly., mostly Ernest young depressives. Actually this group is very accepting of all who attend.
I left at half time, figuring I had better come home and use an ice pack. Carol was willing to leave anyway, having read a number of her poems. Walking to the car was extremely painful. John helped me into the house, and I applied ice. It did not throb or hurt when I went to bed.
In the morning, when I got up it hurt like hell, so I decided I had better go to the ER and get an Xeay.
Our local hospital has been swallowed up by one of the mega-hospitals in Cleveland, and now goes by the awkward title of University Hospital Portage. County Medical Center.. They have instituted an ER service called InQuicker, which allows you, in non-life threatening medical cases, to book an appointment before you go so you won't sit in the waiting room for hours. It worked very well but there was nothing going on there anyway. I was in and out in an hour and a half. The radiologist even showed me the Xeay. That spiral fall fractured my third, fourth and fifth meta tarsals. A n
urse practitioner splinted the foot, and I was told to see an perhopedists as soon as possible.
I was told not to use any weight bearing activity on that foot. Hah! I am using my broken hip  walker and it is almost impossible not to use two feet to get to where I need To be, I could not get an
appointment until this coming Thursday, so I am staying off my feet as much as possible, except for staggering and dragging the walker to the bathroom. .
The NP said not to get the splint wet, and that I should keep my left leg out of the tub when I take a shower. Now, when you have an 89 year old person who lost  her balance for no reason, does it make sense that that person could manage to take a shower with one leg outside of the tub? Not gonna even try it.
Posted by Guenveur in Kent at 12:06 PM