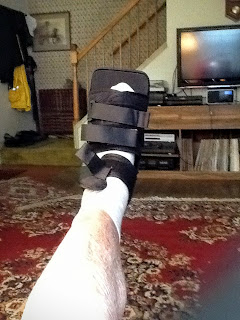 Yesterday I went to the foot doc at the Crystal Clinic, a monolithic orthopedic practice in northeast Ohio. My hip docs are part of it. This one is in Hudson. It is in a very large building, and I don't know how many docs are in it. You walk, or limp into this enormous lobby/waiting room, with a long counter behind which stand a number cheerful people to greet you and start the process. Since I am in their system, this did not take long. I was taken down a very long crridor to an examining room.
The decor in most medical facilities these days seems to be gray. When I mentioned this to the nurse, she said, "It's taupe." I said that it looks like a shade of warm gray. I know my grays.
She looked at the splint encasing my lower leg and foot, asked a few questions, typed a while on the ubiquitous computer, and left.
Some time later, another person came in, looked at the splint and remarked that it needed to come off. Duh! She left, and some time later, as I was staring at the gray walls, another person came in and started cutting off the splint, which was made up of layers of bandages. She left, with my leg lying amidst layers of splint material. Some time later, another person came in, who turned out to be the actual doctor. She didn't bother to introduce herself, assuming I knew who she was because she was the only one so far wearing a white coat, bur I asked her anyway and she said she was. I didn't mean to be a smart ass, but I told her that I felt as if I were in a very slow version of speed dating. She was not amused, but then she hadn't been sitting a a gray room for 45 minutes with various people popping in and out. It's really factory medical care, if you ask me. And this is not that Spector that the conservatives call Socialized Medicine.
Well she was nice, ordered the "shoe." Told me I could walk on it, that I had to wear it at night, too, on account of making sure that if I had to get up I would need it.  I have to see her in a month to see how those meta tarsals are mending.
It doesn't hurt, fortunately, but it is limiting having to use a walker, the old fashioned kind, not  one of those candy colored red ones with hand brakes. I'll survive.

Posted by Guenveur in Kent at 9:35 PM